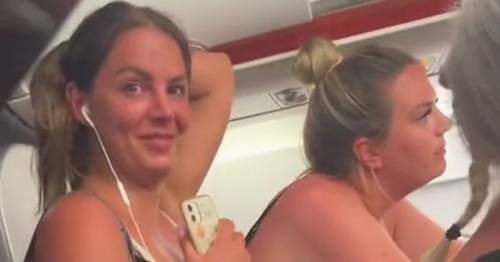 A group of women who boarded an easyJet plane were left stunned to find out their allocated seats didn't exist.

Excited holidaymakers Daisy Barr and her friends navigated the long queues at the airport, pass through security and boarded the flight ready for their holiday.

However, when the group boarded the easyJet plane and checked for row 26, which was shown to be their seats on their tickets, they found there were no chairs in the row, the DailyStar reported.

Daisy posted a video clip of the situation on TikTok, @daisybarr1, where it went viral racking up over 141,000 likes.

In the TikTok video, the women showed themselves standing awkwardly in the spot where the seats should be.

The ladies boarded and were looking for their row
(

To the tune of Mission Impossible, they swung the camera to show that the overhead seat numbers clearly stated they were in row 26 – but it was standing space only.

One of the holidaymakers squatted where the seats should be while the others leaned on surrounding chairs and looked for staff members.

They held their passports and tickets as other passengers happily loaded their suitcases into the overhead cabin.

In the comments, Daisy wrote: “We obviously didn’t stand up during the flight.

“We just went and found some empty seats, and no one helped us, luckily there were some.”

She added: “Turbulence was mental.”

While another one of the women, Laila Barr, clarified that the flight was with easyJet and added: “But nothing about this flight was easy.”

And, it seems it’s not the first time the situation has occurred.

A commenter posted: “This literally just happened to me with easy jet on both flights!

“Told me to sit in someone else’s seat who then shouted at me.”

Others expressed worry about the situation.

Kenna Clark said: “Don't scare me like this, I've just booked my seats for the back two seats on the plane so a stranger doesn't have to sit next to us with a baby.”

“I’d be fed up… I hope you got put in first class,” added another commenter.

While another joked: “They actually did it. Standing room only on flights now.”

And, a third noted: “The passengers are not made to stand up during the flight. 26 has been taken out so EZY can operate with reduced crew. It is the ground staffs role…”

An easyJet spokesperson said: "There has been a change in seat configuration on some aircraft this summer for operational reasons and so we reallocated these customers new seats and they flew as planned.”

Previous : Henry Nicholls out in bizarre fashion as Jack Leach takes one of luckiest wickets ever
Next : Mum finds missing son’s body after psychic 4,500 miles away tells her where to search