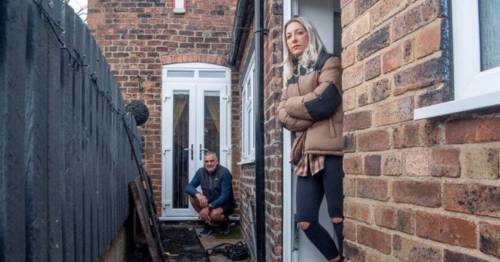 A woman has been forced to keep her windows closed because human poo keeps washing into her garden.

Rebecca Taft has been left in tears over the sewage that floods into her garden.

Her artificial turf has been completely destroyed and she is forced to keep her windows shut due to the stink.

Peter Taft, Rebecca's 55-year-old dad, says poo has been washing up into the property's garden in Northwood, Stoke-on-Trent for the last month.

Water company Severn Trent has sent employees out more than 10 times to investigate a manhole in a nearby entrance which is thought to be causing the issues but have so far failed to fix the problem.

Peter told StokeonTrentlive he has had to keep the entryway unlocked as he doesn't know when Severn Trent will turn up – and says he has found 'druggies' in there 'shooting up' as a result.

Rebecca Taft with her father Peter
(

Peter, who owns the property, says problems with the waste began at the start of April.

The dad-of-one said: "My daughter rang me when I was on holiday in Turkey to say there was raw sewage and human poo over her garden.

"I said I'd get one of my mates to come round and he went round the next day. He looked at the manhole in the entryway and he couldn't get a rod down it and he thought it was a collapsed drain.

"They reported it to Severn Trent. They've have been out more than 10 times and they've failed to turn up about five times.

"It's rough up here so I tell Rebecca to keep the entryway locked, but we've had to leave it open as we don't know when the workmen will show up. I've had to kick two druggies out of there for shooting up.

"My daughter hasn't been able to open her windows because it stinks. The sewage is coming back up the drains in her backyard. There's tissue all over the garden. It just isn't nice.

"It's destroyed her artificial turf that cost her £250 and she only got it last year when we did her garden up and now it's ruined. We're going to have to throw it away.

"She couldn't flush the toilet because every time she flushed it was coming out of her garden. The toilet was full of tissue.

Peter says he and Rebecca have called Severn Trent 30 times between them. "They keep saying they need photographic evidence of what's going on in the drain, but they didn't bring a camera with them until the last visit. It's unbelievable," he added.

"I told Severn Trent I have that report and they still haven't fixed it or confirmed what the problem is and it's been over a month. One of their workmen came out and told me he was 99.9 per cent sure it was a collapsed drain and that he'd report it to Severn Trent.

"But no one came back out and when I called them they said they don't know if it's a collapsed drain as they couldn't get a camera down. How many times are they going to send people out?

"My daughter's house is immaculate, she's got OCD and that's made it worse for her because she can't do anything about it. I've had her crying over it. I can't stand it no more.

"I've even had environmental health out. They shouldn't be treating people like this. Severn Trent need to fix it. I think they're absolutely shocking."

Severn Trent say they have now determined what work needs to be done and have scheduled work to fix the collapsed sewer next week.

A Severn Trent spokesman said: "We’d like to apologise to those affected by the collapsed sewer on Cardwell Street in Northwood.

"We’ve had teams on site assessing the issue to determine what work needs to be done and we’ve scheduled work to fix the collapsed sewer early next week – once work starts we’ll look to get this completed as soon as possible.

"We will be in close communication with our customers in the area to notify them about the work that will take place.

"Again, we would like to apologise for the inconvenience caused by the collapsed sewer, as we know how distressing this type of flooding can be."

Previous : After 80 years apart, Toronto woman reunites with daughter on her 98th birthday
Next : NASA to hurl aircraft into space to smash asteroid at 23,000km an hour and save Earth – World News