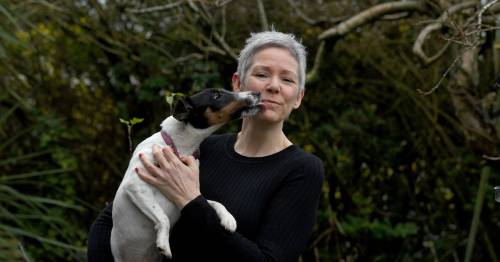 A woman who lost a staggering four stone in six months is claiming shedding the weight saved her life by allowing her to discover a cancerous tumour in her breast.

Andrea Richardson, a 49-year-old Slimming World member, was delighted to have dropped the pounds through Slimming World but was shocked when she found a lump revealed by the weight loss.

The mum-of-two went for tests after finding the lump and was diagnosed with breast cancer.

She has since had the tumour removed and been given the all-clear.

Now, she is crediting the weight loss with saving her life – saying otherwise, she would never have found the lump.

"The tumour was really close to my chest wall, so close in fact that it didn't even get picked up on the mammogram,” she said.

"If I hadn't lost all that weight, I would never have found the tumour as early as I did, and my story could have been very different to the one I am sharing today.

Andrea before her weight loss
(

"Caught early, breast cancer treatment has a much higher success rate, so Slimming World has well and truly saved my life."

Andrea, who works as a social investment Team Leader at housing group Onward Homes, made the decision to get into better shape in July 2019.

She said she had been overweight since having her first daughter in 1997 and decided it was "time for a change".

She joined her local branch of Slimming World in her village of Coppull, near Wigan, Lancs., and said she was thrilled when she shed an impressive 4 stone 1lb.

But in August 2020, after she heard about a friend's cancer scare, Andrea decided to check herself and couldn't believe it when she found a lump in her left breast.

Within days she had received the shocking news that she had cancer.

She added: "It has changed me in many ways. I have more confidence and give priority to myself now whereas I probably didn't before. I feel very lucky as it could have been a very different story.

"Women put it off, getting checked. Don't. As it could have been a very different outcome had it not been caught as early.

Andrea is grateful that she caught her cancer early
(

"I have always been overweight since having my first daughter, Elizabeth, in 1997.

"When I had my second daughter, Isabelle, who is now 18, my weight fluctuated up and down – life makes you fluctuate.

"In July 2019 I decided it was time for a change. The bigger clothes were getting tighter, and it was time to do something about it.

"Everything happened so quickly, I was referred to Lancashire Breast Clinic and before I knew it, I had been diagnosed with stage 1 breast cancer."

Andrea underwent two operations, as the first one was unable to remove all of the tumours, followed by intensive radiotherapy treatment which ended five months later.

She finally got to ring the bell at the Rosemere Cancer Centre in Preston on Christmas Eve 2020 with her eldest daughter Elizabeth, 24, by her side.

Andrea now runs the Slimming World group as she hopes to inspire others.

And now, she has also taken over the running of Slimming World in Coppull as she wants to inspire members and make a difference.