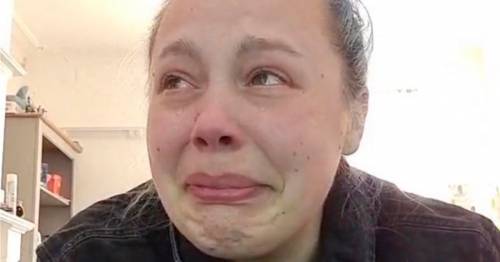 A woman who lost six stone was cruelly fat-shamed when she wore a skirt.

Hannah Woodhams says she began documenting her weight loss journey online as she slimmed down for her wedding in 2022, and has since lost six stone.

However, despite her achievement and new-found confidence, she was fat-shamed when she wore a new outfit.

Hannah said the comments made her feel "21 stone again."

She wanted to be completely honest and open about her wright struggles and posted a video of her crying, and said she was heartbroken by the nasty comments she received when she wore the outfit she previously did not have the confidence to wear.

Hannah shared her experience on TikTok
(

Hannah said she had been wearing a short, checked shirt, a motif T-shirt and denim jacket and admitted she had felt "so good" about herself.

In the video that has been watched 1.3million times and liked over £150k times, Hannah can be seen in tears and showing off the outfit.

She said: "So today I was fat-shamed, I was in shock and couldn't even respond. This is my outfit after feeling so good about myself losing six stone.

She has lost six stone within the last year
(

However, Hannah's supporters rushed to encourage her to ignore the nasty comments.

One person said: "You look incredible! Don't take any notice – it's more of a reflection of themselves than anything. You're absolutely smashing it my dear."

Another said: "One thing I learned is that insecure people will look down on you BECAUSE that's the only way they can feel like they're better. They point out a flaw."

Another TikTok user added: "I am so sorry this happened to you. I teared up just watching this. You deserve so much better & you are beautiful."

In another video she posted, Hannah said she hoped sharing her journey to lose weight before her wedding would hold herself accountable and inspire others.

She was already five stone down and has lost another stone within two months.

She says she is grateful for everyone who supported her
(

Hannah was also criticised for sharing the video of her hitting back at the fat-shamers and said: "The funny thing is when I first posted that video I had about 400 views on one of my videos max and about 18 likes, so the thought of me posting a video crying because I was fat-shamed and it blowing up to 1.3 million views was not what I expected.

"The love and support I have received from posting that video, honestly still to this day, astonishes me.

"I feel so grateful and so loved from so many people – bar when there's comments like this and one that says, 'six stone, I think you need to lose another six…..' thank you for just blowing it up even more."

Previous : Why do some vaccines need boosters and should you get a third Covid-19 jab?
Next : Marketmind: Peak inflation, seriously?