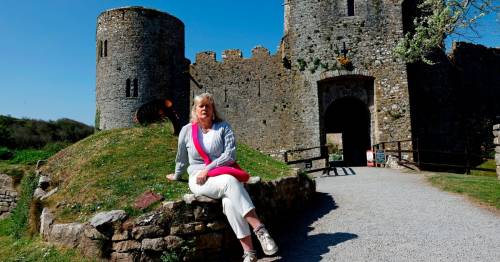 A woman who inherited an 800-year-old Welsh castle says looking after the ancient property is not cheap.

Emily Naper did not ask for the pile to fall into her hands, but family history means she has had to learn about the upkeep of the imposing building.

This is partly because of its rectangular-shaped Norman fortress, but also the fairytale turrets restored chapel and landscaped gardens which bring a magical romantic element to it.

WalesOnline reports that during its 800-year history, lords, knights and historians all wrote about Manorbier and in the 12th century it was described as “the most pleasant place in all the broadlands of Wales.”

It's a sentiment Emily wholeheartedly agrees with.

"I didn't choose to own this castle but it came my way," she said.

"Most people will tell you how spoilt I am but they're not the ones paying the bills.

"Yes I'm very fortunate but it's not an easy thing to do."

Emily, 63, is a cross between a Jilly Cooper heroine and Lady Grantham, according to reporter Laura Clements.

The castle is expensive to maintain
(

"I have posh lineage, yes, but I know how to scrub a floor," she says playfully.

It's no exaggeration. Her lineage could hardly come posher. Plus she owns two splendid piles – this crumbling Welsh castle she's sat in the middle of and the stately Loughcrew in County Meath, where she spends most of her time.

Manorbier Castle was owned by Emily’s grandmother and she has fond memories of it as a holiday destination for the Dashwood children where they stayed in the curious chalet sat within the castle walls.

It has substantial gardens which constantly need attention
(

It's now rented out to holiday guests and as we talk Emily's team are scurrying around preparing for a wedding and putting the finishing touches to the cottage which can sleep 12 people.

Few holiday cottages come with a castle to play with – but then again few cottages cost £6,650 to rent for the week in high summer.

"My happiest memories as a child are here," said Emily wistfully.

For all that lineage and all those titles it seems she prefers the simple life. It was Sir Francis who helped restore some life to the castle.

"My father and grandmother put the castle on a new direction and created an entrance for people to get in," she explained. "Dad was a bit of an entrepreneur. He opened it so people could enjoy it."

Eight years ago when Emily came to Manorbier, which she co-owns with her aunt Beatrice, she had to start from scratch.

She'd inherited a castle with a curtain wall and crumbling steps, no office or any electricity.

"I love the garden, everything about it, it's a beautiful place," she said, her face lighting up. "It feels really loved."

Emily was brought up in another stately home: West Wycombe Park, the Buckinghamshire pile built in 1740 for Francis Dashwood, founder of the Hellfire Club.

In 1943 it was given to the National Trust by Emily’s grandfather Sir John Dashwood, 10th Baronet, and ­today is run by her brother Sir Edward Dashwood, 12th Baronet.

The National Trust has the house and park, the family the furniture and land.

Owning the castle comes with its own maintenance responsibilities and bills
(

"I was privileged to be brought up in a palace,” she says.

"But we didn’t see our parents very often and we were brought up by our nannies.

"We were very privileged – not because of the fabric but because of my father and my mother."

She added. "I have great love for them."

Previous : Brit widow found dead in Costa Blanca ‘may have been killed over real estate dispute’ – World News
Next : Inside Russia’s brutal Black Dolphin prison where the only way to escape is dying – World News