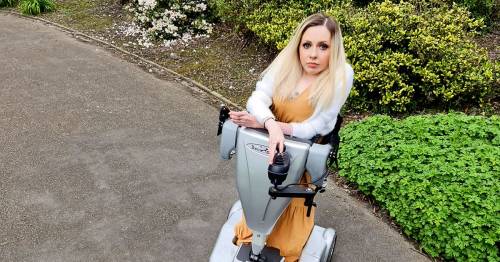 A woman who has been unable to sit down for 30 years because of a rare condition fears her legs could buckle at any moment, leaving her unable to be upright.

Joanna Klich’s hips fused to their joints as a toddler and only remembers a life of having to stand or lying down.

Medics have named the rare genetic condition as spinal muscular atrophy, which weakens muscles and impairs movement, as well as central core disease.

After a lifetime of standing, the 32-year-old fears her legs could soon be at the point of not being strong enough to keep her up, StokeonTrent Live reports.

Despite her limitations, until she was 21, Joanna recalls living a "normal life".

Her symptoms worsened when she moved to Stoke-on-Trent with a boyfriend in 2011 and now uses a vertical wheelchair.

She said: “I can never sit down, all I can do is stand.

“I am in pain every day because I have no support for my bodyweight and my knees are weak. I feel like my left knee will break soon and then I won't even be able to stand. I won't let myself imagine what life would be like only lying down.

“My mum told me I sat down as a small child, but I don't remember that. From what I can remember, I couldn't sit or walk but I could do things for myself, like go to the toilet or get up from bed.

"I would stand in class next to the school desk by my friend, but I never felt different. I had lots of friends and they never treated me any differently.

Joanna, pictured with her grandfather, was unable to sit down as her hips fused as a child
(

"When I grew older, I started to wish I could walk like other children, but I never minded not sitting, because to me that was normal.

“The hardest thing was when my friends would go dancing and I would have to stand and watch, because I couldn't do it."

After moving to England in 2011 as a 21-year-old, Joanna started a business as a nail technician but started to struggle owing to the 15 hours a day she was forced to stand.

By 2016, Joanna had to start using a vertical wheelchair to support herself and move around, but even with this, the pain became so unbearable she had to give up work in 2019.

She now relies on her vertical wheelchair and stand aid to be held upright but is in pain daily as her own bodyweight presses down on her weak limbs.

Joanna also needs a respirator to help her breathe at night because her lungs are weaker lying down.

She also had to face not being able to have children because of her condition with boyfriend, Dariusz Suchowiak, 46.

She fears her legs will soon give way and she will no longer be able to stand and so is raising £6,000 for private intensive physiotherapy, which she hopes will relieve the strain on her muscles and to avoid risky surgery.

Joanna added: “Physiotherapy would make me stronger, so my muscles will be stronger and won't make standing so difficult. If I can get that I won't need the surgery yet, where there is a risk I may not survive.

"But if I was seated, I could do things normally and use both arms, because at the moment I have to use one arm to lean on things, because of the weight on my legs."