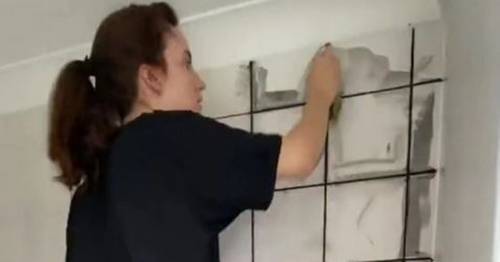 A woman who couldn’t afford a new bathroom has revealed how she revamped the space she already had for just £60.

Posting videos to her TikTok account @our70shome, the DIY-savvy homeowner explained how she saved on cash by using self-adhesive flooring to cover up old lino.

She also kept costs down by using a grout pen to spruce up her tiles, rather than replacing them, and even sanded down and repainted the bath herself.

The TikTok user explained how she and her partner are upgrading their house in Kent.

Here's how the dated bathroom looked before…
(

Going through the DIY project on TikTok, the woman said: "We can't really afford to have our bathroom replaced right now so while Fraser was away this weekend I decided to surprise him with a bathroom makeover.

"The old floor was grim and it just needed a bit of updating so I started by regrouting the tiles black. I started this with a grout pen ages ago, kind of regretted my life halfway through.

"I gave the front of the bath a good sand and then painted it black, then started layering the self-adhesive flooring. This was really painful but it actually looks really good.”

The old flooring was made up of white squares and black diamonds and despite many viewers thinking the TikTok user had covered up tiles, she confirmed it was actually lino.

The self-adhesive flooring she put down is a brown neutral design.

Have you transformed your home on a budget and want to share how you did it? Let us know: mirror.money.saving@mirror.co.uk

After completing the bigger projects, she then "added a bit of spice" by including things like plants, a toothbrush holder, soap dispenser and bath tray.

She said: "Not bad for 60 quid and we will have it replaced properly eventually but for now, this makes it so much less embarrassing."

But some impressed viewers argued that she should leave it as it is.

Another added: “You don’t need to replace it now! It looks great.”

A third said: “£60 is so impressive! Always sceptical of temp fixes and costs but this is so worth it.”

And another commented: “Great job!”

In more makeover news, we've also reported on how one mum saved thousands on her bathroom makeover using £1 stick on tiles.

We've also seen how a couple added £31,000 to the value of their home after giving the “vanilla” property a stunning makeover.

For more property renovations, see how this couple transformed their home in three months for £1,550 – adding £90,000 to its value.