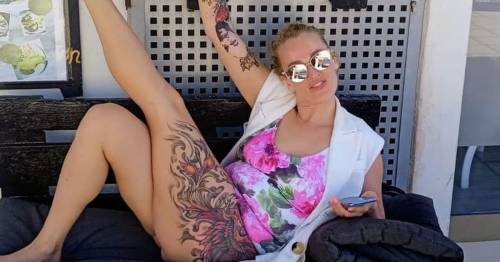 A mum who had a portrait of boxer Tyson Fury tattooed on her forearm says she's been ridiculed by people on social media who say it looks nothing like the Gypsy King.

Mum-of-two Anna Sinclair, 37, got inked with the boxer's visage on Tuesday – a few days after Fury beat Dillian White by knockout at Wembley arena.

Anna says she decided to get the heavyweight champion's face on her arm as a tribute to her "hero", the Sun Online reports.

Inspired by the boxer's own addiction battle, Anna says the example he set helped her to pack in the booze.

But despite the positive and important inspiration behind her tattoo, trolls slated the artwork on social media when she posted an image of it on a Facebook Fury fan page.

Fans said it resembled "Harvey price with a skinhead", "Ross Kemp", and "Boy George without his hat on".

One told her the tat looks "like anyone else by not fury" before telling her she should ask for her money back.

But Anna says she doesn't care about the troll's comments and that she feels sorry for them.

She also believes her idol Fury – who she says is her "ideal boyfriend" – would love it.

Mean commenters ridiculed the tat saying it looked nothing like Fury
(

Anna, who lives in Tenerife, told The Sun: "I chose this tattoo myself and I'm actually very happy with it. The tattooist was great.

"I don't care what anyone says, it's not supposed to be a photograph for him, it's an artwork and looks exactly like the picture I took to the artist. People don't understand it.

"I don't know why people are saying it looks like these random people – but I don't care, other people's business is not my business."

She says Fury is her "ideal boyfriend"
(

Anna said she isn't angry with the haters, but wishes they could see how the tattoo is a celebration of a man she feels passionately about.

Anna says the trolls don't have anything better to do than to mock her tattoo and that she feels sad for them.

The real die-hard Fury fans will be as positive as the heavyweight champ is himself, she says.

And despite her children thinking she's "crazy" for getting the boxer tattooed on her arm, she says she loves him and he's her "dream boyfriend".

Most importantly, Anna thinks the man himself would like the tat, and that it would "make him smile".

It wasn't until Anna watched her first Fury fight that she actually got into boxing.

After becoming hooked she started trawling through his previous fights and online interviews.

Fury – who has been public about his battle with addictions – even inspired Anna to pack in the booze and helped her through some tough times.

Fury has been very open about his struggles with addiction, alcoholism and mental health, having also admitted to being on the verge of suicide in the past.

Previous : Woman spotted climbing down Mount Snowdon in flip flops as stunned witnesses look on
Next : Groomer’s plea to owners who fail to regularly brush their dog’s fur – World News