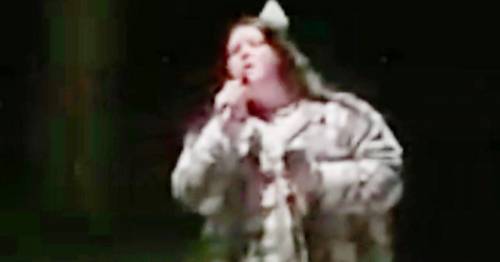 A woman said she had shivers down her spine as she walked along the promenade with her friend and heard a "beautiful voice".

Leanne Walsh had decided to take an evening stroll along New Brighton, Wirral, Merseyside, when she heard the music which she recorded and it has now gone viral, reported the Liverpool Echo.

She said: "I just thought someone was playing music themselves, I even joked to my friend that it could have been Adele, you know the way sometimes celebs just do surprise performances.

"As I got closer I realised it was a girl singing. She was unreal, she had such a beautiful voice, I just had to start filming.

"The opening notes to 'Creep' [by Radiohead] just gave me shivers down my spine, I didn't cry, but it did make me quite emotional.

"It is a special singer who can do that to people

"I just think I was so lucky to have stumbled across her – it made my night."

Leanne posted the video to Facebook where people said they were "moved to tears" by the performance, reports the Liverpool Echo.

The singer was 23-year-old Lauren Swift, from New Brighton, Merseyside, who has been trying to build back her confidence in performing she lost during the pandemic.

She told the Echo: "I started singing when I was 13 and had singing lessons from a neighbour.

"I love Etta Jones, Adele, Tracy Chapman and Amy Winehouse, but I listen to lots of different music."

Lauren, who works in a call centre in Birkenhead, would love singing to be her full time job at some point in the future and stepped out on to the prom last night (Monday, October 11) to help boost her confidence.

She said: "My confidence took a bit of a knock during lockdown and it took me a while to get all the equipment together to do something like that.

"But last night I just went for it and my best friend Emily McArdle came with me.

"I was so overwhelmed by the response, the fact that people just stopped and listened and were so nice, was amazing.

"I am still overwhelmed now to be honest.

"This is my passion and it always has been. When I sing I feel like a different person – I feel like me – communicating how I feel with the world."