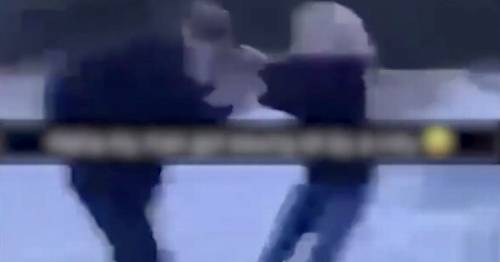 A woman has been filmed punching and trying to headbutt a 15-year-old schoolboy after it is thought that another pupil threw a snowball at her car.

The shocking footage shows the woman gripping the boy, from Springhead, Oldham, by his Saddleworth School blazer in the attack, reported the Manchester Evening News.

The teen's dad received a call from the school last Friday, January 7, after being told what had happened that day with there having been heavy snow in Saddleworth.

Two of the boy's friends had videoed the attack which took place by the school gates at about 3.30pm and shared the incident.

It is believed to have started when another pupil threw a snowball at a car passing outside Saddleworth School, opposite the Spiritualist Church on High Street, Uppermill.

The dad of the teen who was attacked said that the car was travelling in the direction of Diggle when the car was hit by the snowball.

He said the woman – seen in the video with blonde hair, a dark top and blue jeans – left the car from the passenger side and approached his son.

The dad said: "My lad and a group of students were coming down the driveway from the school. They have crossed over the road, then one of his mates has thrown a snowball at a car.

"I'm not sure if they've had a few choice words, but it ended up with this woman going to my son and asking 'who was it?'.

"He says he won't tell her – so she grabs him, starts trying to headbutt him and punch him round the back of the head. It's just bizarre really."

Other pupils filmed the attack on the boy

The boy's dad says he has been given accounts of what happened from his son, his son's friends and the school, as well as seeing the two videos circulated online.

"We're not the sort of parents that would defend him if he's done something wrong," he added.

"We've only heard that someone else threw the snowball.

"But even so, it's no reason for her to start throwing punches at him."

The dad says the incident has been reported to Greater Manchester Police, with a crime reference number of CRI06QQ0000053722.