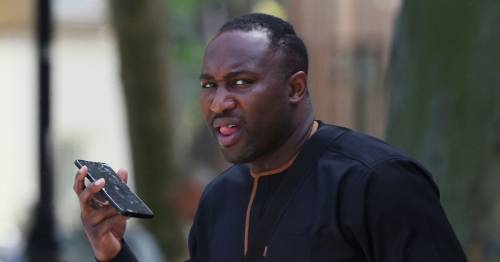 A Tube driver invited a passenger into the cockpit of a train and sexually assaulted her while he was driving, a court has heard.

Nathaniel Cummings-Stewart, 47, allegedly told the young woman to sit next to him in the driver's seat before it is claimed he touched her leg and made lewd comments.

The 46-year-old is accused of switching off the driver cab lights of the London Tube train and inviting the woman to his hotel to " Netflix and chill", MyLondon reports.

He denied a single count of sexual assault after being reported to British Transport Police.

Jurors at Inner London Crown Court on Thursday were told the woman had travelled to London with her friend for a long weekend and had been staying at a hotel near Waterloo.

On August 21 2020, she travelled to Wembley Boxpark to meet with friends and decided to return to Central London later that evening.

In order to avoid missing the last train, the woman, who cannot be named for legal reasons, was walked by her friend to the nearest station to board the Jubilee line shortly after midnight.

After arriving, she was approached by Cummings-Stewart who, the court heard, had asked "Which stop are you going to?”, and invited her into the driver's cab.

She told the court that being unfamiliar with London, she thought he was someone "to be trusted" as he was in a TfL uniform.

She claimed that he smelled of cannabis, telling the jurors: "It was strong, it must have been recent [that he'd been smoking]." She said she sat next to him as he worked the controls of the train.

During the course of the journey to Waterloo, he asked her questions about her visit to London, the location of her hotel and asked her to remove her Covid-19 mask, she claims.

The woman claimed he "turned the lights off, closed the blinds and locked the door" and began to suggest that he would come to her hotel after his shift ended in two hours.

He also told her he wanted to shower and "Netflix and chill" with her, before taking her phone and insisting that she accept his number, the court was told.

The woman told jurors that she had felt "uncomfortable" and had refused to give her own number and told him she was 19, before texting her friend which failed to send due to signal problems.

Whilst they were travelling between Tube stations, she said he reached over to give her a high five, before beginning to touch her upper thigh.

After arriving at Waterloo station, the woman insisted it was her stop and left through a side door.

Speaking of her reaction to the incident, she said: "My heart was beating really, really quickly; as soon as I got out of the platform I was jogging, my heart was pounding."

She said she confided in her mum a few days later and reported him to Transport for London Customer Services.

Taking the witness stand, her mum tearfully said: "She was sat at the table, I was cooking, I believe, and I knew something was wrong, she's my daughter.

"I could see she wanted to tell me something. The way she looked, the way she was looking at me, her whole posture. She brought it up. She said she had something to tell me.

"My gut feeling was something had happened with a man and she's going to tell me something that I don't want to hear.

She then tried to explain what happened. From what I can remember she said something had happened on the Tube and she said a man touched her.

The first thing I asked her was 'were you raped' because that’s my first fear, and she broke down and cried."

She continued: "She then said he said to her where is she staying, she said where she was staying and what she was doing in London, he then suggested that he could come back to the hotel with her to have sex and he would shower off and no one would know.

"She then said she was so scared she told him he was younger than her age, hoping that would scare him off and he would leave her alone. He took her phone and put his number in her phone and told her to call him."

He said he invited her into the cockpit because she appeared "distressed" and claimed she told him she was being followed, which the woman told jurors "was not true at all".

Under Transport for London guidance, drivers are not permitted to allow passengers into the cockpit before contacting controls or a manager.

During his police interview, Cummings-Stewart said he "overlooked" that guidance but had wanted to ensure her protection.

He also denied smoking cannabis or consuming any alcohol or drugs whilst driving the train.