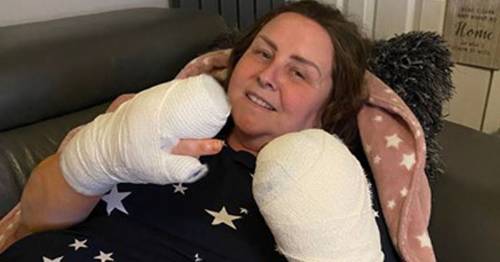 A woman had eight of her fingers removed after a mystery illness caused them to turn black and her organs to start failing.

Catriona 'Tina' Patterson, from Edinburgh, was blue-lighted to hospital in March after paramedics were unable to detect a pulse in her index finger.

The 51-year-old had suffered from Covid-19 the week before and, despite being fully vaccinated, had continued to suffer from fever-like symptoms.

As doctors scrambled to figure out what was wrong, Tina's organs began to shut down and she was admitted to the intensive care unit at Edinburgh Royal Infirmary in a life-threatening condition.

Thankfully, with the expert care of medics, Tina pulled through.

But only now can she appreciate just how unwell she has been.

Reflecting on her ordeal, Tina told the Daily Record that she initially assumed that her health struggles were due to a Covid-19 infection from the previous week.

"I just thought I was still feeling the effects of Covid," she said.

"I had only just had it, so I was blaming my symptoms on that.

"I never for a second expected it to be as bad as it was."

She added: "I had been feeling exhausted and in pain for several days. My feet were absolutely freezing and I was so uncomfortable.

"When I finally went to the hospital, one of the things I remember is the pain I felt in my fingers.

"I remember asking the nurse to cut them off or knock me out because I couldn't take it any longer.

"It was shortly after this that I took a turn for the worst. My organs were completely closing down and doctors thought I was going to die."

Tina has since had four blood transfusions, received dialysis on her kidneys and must now take blood-thinning medication daily.

Earlier this month doctors amputated eight of Tina's fingers after the tips of them turned black due to a lack of blood supply.

Despite numerous medical investigations, doctors have still been unable to explain exactly what caused Tina to become so unwell.

"They have told me it could have been a virus which was kick-started by Covid, but again they aren't 100 per cent sure," she said.

Medics said that her blood started to clot, cutting off the supply to her limbs and resulting in the blackening effect and need for amputation.

Tragically, she may also have to have four of her toes removed as doctors fear they may fall off due if they don't operate.

Tina said it was hard to describe how she was feeling after such a traumatic series of events.

"What's happened was so unexpected and all happened so fast," she explained.

Despite being "gutted and totally devastated" by the amputations, Tina said was "happy to be alive" after such a horrifying ordeal.

"My recovery is going to be long, but I'm trying to stay positive," she said.

Friend Lisa Haydon has organised a fundraiser to help Tina and her family financially as she continues to focus on her recovery.

"She nearly died as she was so dismissive of it and now she's lost eight fingers and waiting for toes to fall off.

"How do you pick yourself up and carry on? She needs assistance and people are kind.

"If someone can donate theatre tickets or an aid to help her around her home, it would be wonderful and so appreciated by this gorgeous couple!

"They are so loved by friends and family, I just wanted to get them any help out there."