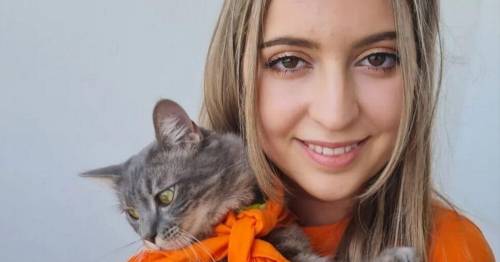 A woman has told how she started feeling "lightning-like" pains in her legs and was shocked to learn her spine was fusing together due to a rare condition.

Kate Liberty, 24, from Llantrisant, visited her doctor when the pains started occurring each day and after it was found she had raised levels of inflammation, she went for scans at the Royal Glamorgan Hospital.

It was then that she was given the news that she had a form of arthritis called ankylosing spondylitis, reported WalesOnline.

"It was initially quite a shock, but I was lucky to be diagnosed within six months of experiencing symptoms. I know it can take many years for some people to receive their diagnosis," she said.

"I had been going through an extremely tough time with my home life and studying for my A-Levels, and the diagnosis was another added stress. At first, I felt very alone and my family and friends didn't understand what I was going through."

Kate went to the doctors due to "lightning-like" pains
(

Kate says ankylosing spondylitis is a progressive condition and is likely to see her mobility deteriorate over time.

When she has so-called "pain days" she needs help with everyday tasks.

"I get a lot of my pain at night when I'm trying to sleep. About three or four hours into my sleep I have to get up or try and sleep sitting up because my upper back aches a lot when I lie on it for too long. I find that wearing comfortable shoes with lots of support helps me throughout the day," she explained.

"I find I get the shooting pain when I'm going from a seated position to standing up. When I'm having a really bad day I do have to rely on my husband for many things – and I do feel like I lose my independence."

Kate, who was diagnosed with ankylosing spondylitis in May 2016, said it took a while to accept that she had the disease.

"Being diagnosed at 18 was also difficult because that's when all my friends started going to all the bars and nightclubs in Cardiff. But I just felt really uncomfortable going out because I just knew that I'd be in pain and I wouldn't enjoy it. I felt like I lost out on a lot of memories with my friends before they all went off to university," she admitted.

Over time, Kate said her condition is likely to cause her more pain. She added that some of the bones in her lower vertebrae will fuse and form new bones which could affect her mobility.

"But I'm really lucky that I live in a time where these there are lots of new medical treatments available for people like me," she added. "I started off with just paracetamol and ibuprofen, but after a while I had to be put on the stronger painkiller naproxen which I've been on for about five years.

"I'm now looking to start on what are known as biologic therapies or biologic treatments. There's one called Humira which is a disease-modifying drug that I'd have to inject one or twice a fortnight. It apparently stops the inflammation from getting any worse, so it could be life-changing for me."

Kate said that the condition means her spine is fusing together
(

She added that as the illness is invisible, there is stigma attached to it.

"For instance, if I was on a train from Pontyclun to Cardiff I'd be embarrassed to ask for a seat from someone," she said.

"People often wonder how I can have arthritis when I'm so young. I didn't really get a lot of support from anyone in school, it just came from my really close friends, my mum, my auntie and my then boyfriend who has now become my husband."

After Kate was diagnosed she discovered that her grandfather, who had died when she was only four years old, had also lived with ankylosing spondylitis for much of his life.

"One of my earliest memories was of him being in a wheelchair, and he was blind. But when you're young, you don't really ask questions like 'what's wrong with granddad?' It was quite a shock when I found out that he had ankylosing spondylitis too. I wish I could have been around him more."

In addition to her ankylosing spondylitis, Kate also found out in April that she has Crohn's disease, a common complication from the condition as both are auto-immune disorders.

Despite her chronic ill-health, she has decided to take part in the 'Walk your AS Off Challenge' to help raise money for the National Axial Spondyloarthritis Society (NASS). While she hasn't set a specific goal, her aim is to walk 10,000 steps each day in May. To visit the fundraiser click here.