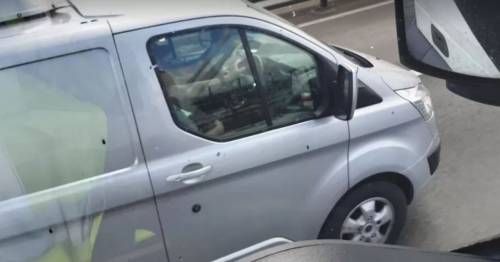 A reckless motorist was filmed driving while eating a bowl of cereal with a spoon on a busy motorway.

The unnamed 23-year-old woman was fined after scoffing her breakfast behind the wheel on the Queensferry Crossing, in the direction of Edinburgh, Scotland.

Police have started to used an HGV cab to give them a better view of drivers and were shocked at what they believed they first saw.

She was pulled over and the officers then found the half-eaten bowl below the passenger seat.

In a Facebook post, police said the woman was fined £100 and given three points on her licence as they continue their war on careless drivers.

Police have been using an unmarked HGV cab to monitor drivers
(

They also stopped a man that was driving a HGV whilst both hands were grasping his mobile, using his forearms to steer the vehicle. He received a £200 fine and six penalty points.

The post read: "Our road policing initiative – Operation Tramline – is having considerable success in the Edinburgh area with drivers being fined for various offences since it began on Tuesday, 26 April.

"A 23-year-old woman seen driving in lane two of the M90 Queensferry Crossing eating cereal from a bowl as she drove southbound. She was fined £100 and had three points added to her licence.

"On the Edinburgh City bypass a HGV driver was found to be using both hands on his mobile and steering with his forearms, clearly not in control of his vehicle. He received a £200 fine and 6 penalty points."

The initiative is designed to catch those putting others in harms way whilst driving on the roads, and it seems to be working so far.

Road policing officer Tom Aitken said: “Reducing the number of road casualties is a priority for Police Scotland and we are always looking at ways to enhance our ability to investigate road traffic offences.

“As well as working closely with partners to help make roads safer for all road users, we regularly use footage from dash-cams, head-cams and CCTV to investigate road traffic offences.

“Most people know the effect alcohol and drugs can have on driving, but the small things can be overlooked. It is just not smart eating as you are driving, it is downright dangerous.

“The same goes for using any mobile device and reading. Acting like this means you are distracted and therefore not in proper control of your vehicle. A split second lapse in concentration could result in a crash.

“Not wearing a seatbelt is life-threatening. If you are not fully secure then the consequences if you are involved in a crash could be deadly.

"Road policing officers unfortunately see the devastation this causes and we urge drivers to be responsible and make sure they are safe. Think of the effects a crash could have on your loved ones.

“The HGV enables officers to have a good view of drivers and what they are doing. It is another tool we are using to make Scotland’s roads safer.”

Previous : Brendon McCullum ‘did not apply’ for England job with Rob Key making him ‘first choice’
Next : Man left disabled after being thrown from horse spooked by dog sues owner for £5million