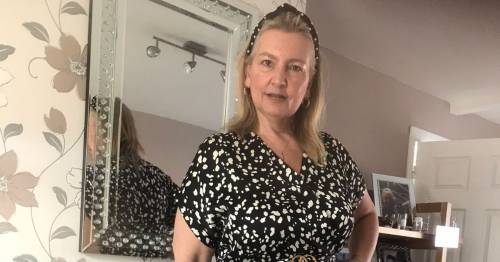 A woman who dropped eight and a half stone says she "feels like a different person" after going from a size 24 to a size eight.

Linda Bailey, 54, from Welham Green, went from 24 stone to 15.5 stone in just 17 months after attending her local Slimming World group.

Having suffered from a chronic pain disease and growing unhappy in her frame, Linda decided to take matters into her own hands in 2019 after getting out of breath just taking a few steps.

"I started to put on weight as I have fibromyalgia and a chronic fatigue syndrome," she told Hertfordshire Live.

"I also had lost confidence in myself and with looking after my mum as well it all took its toll before I found Slimming World.

Having suffered from a chronic pain disease and growing unhappy in her frame, Linda decided to take matters into her own hands in 2019 after getting out of breath just taking a few steps
(

"I tried a number of different ways to lose weight, but they usually left me feeling hungry or miserable – or both, in fact.

“I remember feeling like I would never be happy in my own skin again.

"I feel like a different woman to the one who walked into Slimming World in 2019 and I’ve realised that when people believe in you like my consultant Amy Jefferies and fellow members do – and you believe in yourself – you can do anything you set your mind to."

Linda's relationship with food has now totally changed, and she has learned how to prepare what she eats in a healthy way.

She's also had support and encouragement from friends and family, as well as her partner Paul Lamb, 53.

"I can walk and I couldn't walk before, I'd walk a few steps and then I'd be out of breath," she added.

Now she knows how to prepare food in a healthy way
(

"I'm off most of my medication, I'm still on some of it because my ulcers aren't curable and it has to be maintained, but not at such a high dose.

"My partner had a stroke in August and I've been caring for him, it was the other way around before with him looking after me.

"Looking after my mum at the same time has been challenging but I'm just feeling a lot healthier."

It hasn't all been plain-sailing since she first walked through the Slimming World doors back in 2019 though.

The Covid-19 pandemic threw up all sorts of extra challenges, but Zoom meetings helped keep Linda, who works in the motoring trade, motivated and eager to continue.

She now enjoys snacking on things like fruit, carrots and hummus, as well as crisps now and again, instead of comfort eating.

Linda lost 10.5lbs in her first week and was left blown away that the changes she’d made had such a big impact so quickly.

Long walks are now a source of enjoyment and something to look forward to, rather than something to put off or avoid altogether.

Her efforts even saw her crowned Miss Slinky, an award which celebrates Slimming World members who have achieved their weight-loss dreams.

"Winning Miss Slinky is a real honour because there are so many amazing women and men in our group," she said.

"Being able to celebrate with all my new friends around me after months of being apart made this win feel more special.”

With 2022 fast approaching – a time when people often look to make New Year resolutions and alter their lifestyle – many may be thinking of joining their local Slimming World group.

Linda urges anyone to give it a go – and then reap the benefits.

"Don't feel that you're on your own, there are people who are there to help you that have gone through it.

"You're not judged. I walked through the door [at first] and I thought I was probably the biggest person, but I wasn't. Even if I was, people aren't judging you."

She also paid tribute to Slimming World's Amy Jefferies, who runs the Hatfield group on a Wednesday, for her support and encouragement throughout.

"She’s a fantastic ambassador for Slimming World and what she’s achieved – especially during the last few months which have been incredibly tough for many of us – is nothing short of incredible.

"I’m constantly inspired by Linda's determination each week and she has come so far from the first time she walked into my group – she’s now beaming with confidence and she’s definitely made changes for life."

Previous : NASA to launch spacecraft in effort to smash asteroid off course
Next : Venezuela opposition says it must rebuild after heavy election loss