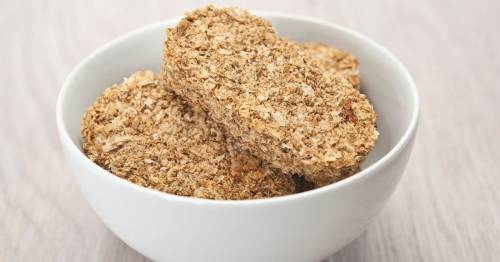 A hospital patient who could not eat wheat died days after being given Weetabix for breakfast.

Now a coroner has criticised health bosses over the investigation into her death.

An inquest heard Hazel Pearson, 80, had coeliac disease, a condition which meant she had an adverse reaction to gluten, a dietary protein found in wheat, barley and rye.

She started vomiting hours after eating Weetabix, which is 95% wheat. Her condition deteriorated and she died four days later.

The cause of death was given as aspiration pneumonia, with Chronic Pulmonary Obstructive Disorder and heart failure as contributory factors.

Mrs Pearson, a former credit controller, was admitted to the Wrexham Maelor Hospital in North Wales last November with fluid around her lungs.

The dietary requirements of patients are supposed to be displayed on a board above their bed but Mrs Pearson’s coeliac disease, which had been diagnosed about 14 years earlier, was not mentioned.

Her son David told the court his “heart sank” after being told she had been given the breakfast cereal.

The inquest in Ruthin heard a three-point action plan was drawn up following her death designed to ensure the signage above beds is accurate and staff are briefed on dietary requirements.

But Kate Sutherland, assistant coroner for North Wales east and central, adjourned the inquest and called for more evidence from the Betsi Cadwaladr University Health Board.

She said: “It is commendable that local action has been taken but I am concerned at what I have been told about the investigation.

"That is a very narrow vision – amateurish – and with no strategic vision as to learning.”

The Daily Post reports the pensioner was fed Weetabix, which consists mostly of wheat, for breakfast between the hours of 8am and 9am, the inquest heard.

By 11.20am that day, Mrs Pearson's condition had worsened with reports from nurses on the ward saying that she had begun to vomit and that she was heaving for large parts of the day.

Mrs Pearson was prescribed anti-hermetic medication shortly afterwards to stop the vomiting but she refused to take it because she said it had previously made her ill, a nurse said in a statement.

Joel Abbott, a consultant geriatrician who was involved in Mrs Pearson's care, said that she vomited at around 5pm on November 26 and that her condition deteriorated from then on.

Concerns then arose that the acid from the vomit would burn the lung if it was aspirated. Sadly, Mrs Pearson's condition did not improve and she passed away four days later.

A medical cause of death of aspiration pneumonia had been provided earlier at the opening of the inquest on December 13.

Mrs Pearson's son, David, who appeared as a witness told the court he was heavily involved in the care of his mother, along with his son and brother, following the death of his father.

He described her as a "very independent" and "loving mother, grandmother and wife" and said that his "heart sank" after hearing from the hospital on November 26 that she had been fed Weetabix for breakfast.

Mr Pearson said he had been making regular calls to the hospital to ensure that her dietary requirements were met.

He had initially taken his mother to the A&E department at the Maelor back on August 20 and was told by her over Facetime 11 days later that she had been sick because she had been fed bread that she suspected was not gluten free.

Mrs Pearson, who was first diagnosed with coeliac disease around 14 years earlier, was in hospital because she had fluid around her lungs and needed treatment.

She also suffered from heart problems and COPD and "wasn't the same" after suffering a fall in 2017, according to her son.

A couple of months after being initially admitted to the Maelor, she spent around a month at Deeside Community Hospital where she was ill after being fed sausage and mash with gravy for lunch which a sister at the hospital eventually told Mr Pearson was not gluten free, the court heard.

This meal had caused her to vomit to the extent that she had difficulty swallowing as her throat had become sore, leading to the worsening of her condition and a return to the Maelor on November 23.

The dietary requirements of patients are supposed to be displayed on a board above the patient's bed. They should also be mentioned in a specific section of the handover.

Mrs Pearson's coeliac disease was not mentioned on the board above her bed nor was it mentioned in the section of the handover that it should have, though it was written in the document's background notes, the inquest heard.

A three-point action plan was drawn up following Mrs Pearson's death designed to ensure that the signage above beds are accurate and that staff are properly briefed on the dietary requirements of patients.

Within the Maelor, posters have also been put in staff areas and attached to notes trolley. The actions implemented at the Maelor will also be shared across the health board.

Previous : Dog owners face unlimited fine for failing to stop their dog’s excessive barking
Next : Russia forces everyone in occupied eastern Ukraine to pay £200 each to fund war – World News