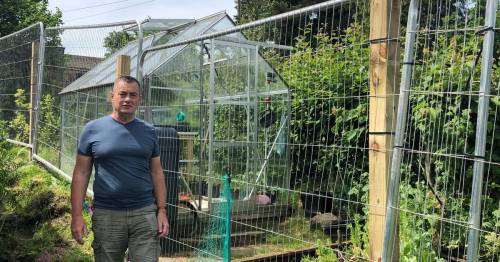 A woman is thinking of taking legal action after an 8ft-high metal fence was put up through the middle of what she claims is her garden.

Gillian Arnold has said the fence was installed on Wednesday morning by workmen at a neighbouring building site, adding they used "bully-boy tactics" and that there was "no quibbling" with them as they were "not going to stop".

The developer has said that the land is part of the overall site where they are building a housing estate, but Mrs Arnold disputes this as she said she has used the land as a mini allotment for nearly two decades.

The dispute over the land off Abbey Road in Shepley began last year, reports YorkshireLive.

The fence that has divided a garden on Abbey Road, Shepley, Huddersfield in a dispute over who owns the land
(

Mrs Arnold said: "They say it's theirs. But it's not in their plans and they don't show it being used.

"They warned me they were going to [put the fence up].

"I said they couldn't because we were in dispute [about the ownership] but they have decided that the land is theirs.

"They said they'd sent a letter to me but I've never seen it.

"They will not even share the said letters with my lawyers, so I can only believe they don’t exist.

"In fact they said they'd sent it to my lawyer, but I didn't even have a lawyer at the time.

"Then they brought it round. The man who delivered it took a picture of himself posting it through our door.

"It was dated April.

"My take would be that because the land is disputed, then they should not be on there concreting enormous posts into my gardens.

The greenhouse is on the other side of the fence
(

"My greenhouse is on one side and I am on the other.

"This is bully-boy tactics, and it's out of order. I'm considering an injunction."

A spokesperson for Camstead Homes – who is building the Shepley New Mills housing estate – said: "The company has legal ownership of the land in question.

"It has erected a fence around its property to secure it, pending development.

"It would not be appropriate for us to comment any further in relation to this private matter."

Ward councillor John Taylor (Con, Kirkburton) said he was "gobsmacked" when he saw the fence and suggested the dispute should be settled by legal means.

He said: "I am shocked at the way the developer has behaved.

"This is clearly a legal boundary dispute that needs settling through the courts and not by constructing a fence through the middle of somebody's garden.

"While that goes through the courts I would expect the developer to behave in an appropriate manner given that ultimately this is their neighbour."

Kirklees Council approved the contentious plan to build up to 34 homes on the site a site in May 2020 even though it is known to flood.

Residents said the development would create even more problems, and could push run-off further down the valley as far as Fenay Bridge four miles away.

The decision to approve the scheme was made by the council under executive powers enacted during lockdown as its committees were unable to meet.