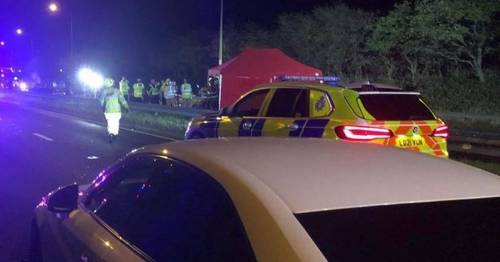 A woman and two men have been killed in a car fire tragedy in East Yorkshire.

Police said a white BMW 1 Series collided with a grey Peugeot 3008 before coming to a stop and setting alight on Monday evening.

Emergency services were called to the scene on the A63 near Melton at around 10pm.

A third man was taken to hospital with life threatening injuries, where he currently remains in a critical condition.

A police statement said: "Investigations are underway into the circumstances surrounding the collision and we would ask witnesses or anyone with dashcam footage from driving in the area at the time to contact us on 101 quoting log 497 of 22 November.

Do you know anyone involved? Email webnews@mirror.co.uk.

Traffic on the A63, towards Humber Bridge

"Alternatively, you can report information anonymously by calling the independent charity Crimestoppers on 0800 555 111.

"Specially trained officers have been assigned to offer support to individuals involved and their families at this difficult time."

Diversions are in place.