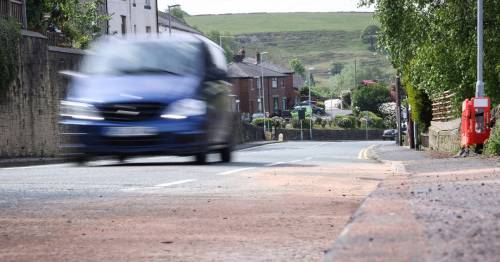 Woman, 82, dead and another fighting for her life after horror crash as man arrested

An 82-year-old woman has died and a second woman is fighting for her life following a crash in Rochdale.

A 24-year-old man, who was driving an Audi involved in the crash, was arrested on suspicion of causing death by dangerous driving.

In a statement Greater Manchester Police said a 55-year-old woman, who was a front seat passenger, is in a critical condition.

Two cars were involved, police said, an Audi and a Kia, the Manchester Evening News reports.

He remained in police custody on Saturday morning for questioning.

The 82-year-old woman was driving the Kia, GMP confirmed.

In a statement, the force said she was sadly pronounced dead at the scene.

A 21-year-old man who was also in the Kia at the time suffered minor injuries.

Police are investigating the fatal crash, which also left a 55-year-old woman in a critical condition
(

The collision was reported on Halifax Road, Littleborough, at around 10.50pm on Friday night.

In a statement, GMP said: "A man has been arrested on suspicion of causing death by dangerous driving after a woman died in a road traffic collision in Rochdale.

"Officers were called to the incident between two vehicles on Halifax Road, Littleborough, at around 10.50pm on May 13, 2022.

"The 82-year-old female driver of a Kia was pronounced dead at the scene while the front-seat passenger, a 55-year-old woman, is in hospital in a critical condition.

"A 21-year-old male from the same car received minor injuries. The 24-year-old male driver of the other car, an Audi, is being questioned in police custody."

The road was closed in both directions at its junction with Schofield Street.

In a statement, a Greater Manchester Fire and Rescue Service spokesperson claimed five people were taken to hospital in total, but that hasn't been confirmed by police.

The fire service said: "At 11:57pm on Friday, May 13, 2022, three fire engines from Littleborough and Rochdale fire stations, along with the technical response unit from Ashton, attended a road traffic accident on Halifax Road, Littleborough.

"The incident involved two cars and firefighters used lighting and hydraulic cutting equipment to extract casualties from the vehicles.

"Five people were taken to hospital by North West Ambulance Service. Crews were at the scene for one hour and forty minutes."

Motorists were advised to avoid the area and seek alternative routes. No further details have been revealed.

Previous : Mum grieves for soldier son 15 years after losing his brother in Taliban bombing
Next : Urgent search for girl who vanished from McDonalds after travelling to meet friend