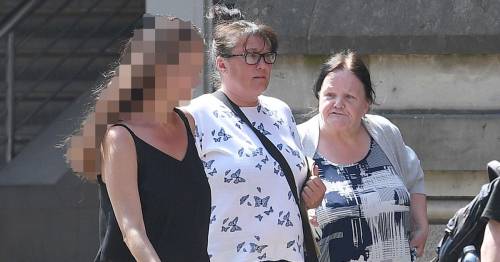 A 70-year-old woman punched a man in the face sparking a mass brawl like a 'pack of animals'.

Margaret Docherty, 70 and 42-year-old Lindsey Pollard were both at a party with 31-year-old Umar Ashiq to celebrate a neighbour's 40th birthday,

A court heard they were drinking outside estate flats in Rochdale, Greater Manchester, in September 2020.

Akib Iqbal, 25, headed towards one of the flats with Madasar Iqbal, who shared his home and who had previously been in a relationship with Mr Ashiq.

As they walked past the gathering, Madasar made a comment to the group about Ashiq's wife, which sparked the "disgusting" display of violence.

Madasar appeared before Manchester Minshull Street Crown Court separately to answer charges of wounding and affray in relation to his attack on Docherty's son, the Manchester Evening News reports.

Then court heard everyone involved had been drinking that night before the incident, which started to build just before 11.10pm.

After both members of the Iqbal family returned to the flat, Docherty decided to confront Madasar's partner for her words

Docherty then punched Madasar with such force he fell backwards into his flat before she returned to the party.

Prosecutor Roger Brown said this launched a much larger incident, after both members of the Iqbal family returned to the party minutes later, sparking a massive brawl.

Madasar is seen on CCTV footage lifting his shirt, showing a weapon, before the footage shows the gathering descending into chaos.

Docherty and her son are seen arming themselves with chairs, before throwing them and smashing several window.

Pollard, meanwhile, rushed towards Madasar's partner and grabbed her by the hair and threw her to the ground.

She was attacked repeatedly while Docherty landed "at least ten" punches to her head.

Ashiq also kicked her twice as she lay on the ground, shortly after throwing a large metal object at the fight.

Akib Iqbal, 24, appeared at in court with others
(

Mr Brown said Madasar had rushed to Docherty's son attacked him in the back of the head with a weapon and left him seriously wounded.

Iqbal is seen on CCTV holding a plank as a weapon, and kicking out at Docherty's son, Pollard, on one occasion.

Pollard, and Madasar were all taken to hospital for treatment after the attack.

Madasar's partner was, fortunately, not seriously injured in the assault.

Adam White, defending Iqbal, said: "Everybody had too much to drink and quite frankly it was like a pack of animals, it was a disgrace.

"This is a situation my client is not that familiar with and he's still working, married, has a child on the way and a young child who is several months old now so he's done some serious growing up since this incident."

Damian Zelazowski, defending Docherty, reiterated how sorry she was for the acts committed after she "lost her temper".

Adam Watkins, defending Ashiq, urged the court to be lenient on his client due to his previous good character and the fact his involvement in the fight was relatively short, lasting just "ten seconds".

Gwen Henshaw, defending Pollard, told the court that her client's five-year-old daughter would be taken into care if her mum was sent to prison.

She also asked for leniency for the mum, who has a mental health problem and has been affected by domestic abuse and "tragedy involving another child" in the past.

The pair were among four who escaped jail
(

Judge Savill imposed suspended sentences on all four defendants, ordering them all to take part in rehabilitation activity days and complete either unpaid work or follow a curfew.

He said: "This quite disgraceful episode of disorder was confined to those who have been charged and those related to them.

"Quite what all of you thought you were doing on that night is completely beyond me. I can't impose as severe punishments on each of you as I might like because of your personal circumstances."

Addressing Pollard individually he said: "Perhaps out of everybody you deserve to go to prison.

"It seems to me that this court, to some extent, is compelled to suspend the sentence because of the devastating effect sending you to custody would have on your five-year-old daughter.

"She would be torn from you and plunged into the care system."

All four defendants admitted a charge of affray.

Iqbal was sentenced to six months imprisonment, suspended for 12 months, and ordered to do 30 rehabilitation activity days and 150 hours unpaid work.

Ashiq was also given six months sentence which was suspended for 12 months, and ordered to complete ten rehabilitation activity days and 100 hours unpaid work.

Docherty, meanwhile, was given ten months in prison, suspended for 12 months, and ordered to complete 15 rehabilitation activity days and abide by an electronically monitored curfew between 8pm-7am for three months.

Pollard was handed 12 month sentence which was suspended for 12 months, and ordered to complete 30 rehabilitation activity days with a curfew from 9pm-7am for three months.

She will have her curfew lifted for 10 days in July to allow her to go on holiday to Spain with her daughter, before resuming the 12 week countdown afterwards.

Both women will have mitigation, considered by the courts in case of any potential breaches.

Previous : Harry and Meghan planned their royal exit earlier than we thought, says author
Next : 5 players Chelsea could sign this summer as part of Thomas Tuchel’s transfer rebuild