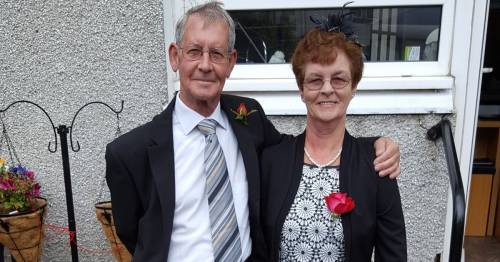 Woman, 68, who waited 12 hours for ambulance in agony now fighting for life

A woman forced to wait 12 hours in agony for an ambulance is fighting for her life in hospital, her family said.

Letitia Brown, 68, from Scotland, was visited by a GP at 11am on October 16 after suffering with sickness and diarrhoea for days.

The doctor told her paramedics would arrive within an hour, but her family became increasingly panicked as that hour turned into 12.

As the wait dragged on all day and night, they watched as as her condition deteriorated, the Daily Record reports.

She became so unwell that she could no longer walk the few steps to her next-door bathroom.

Her daughter Elaine, 41, said: “The doctor was here just after 11am and went out to his car for a while to phone an ambulance.

"He was back in before noon and told us it would be here within the hour.

“It didn’t arrive until 11.45pm, by which time my mum’s condition had really deteriorated. She could no longer walk to the bathroom next door to her bedroom.

“My mum is one of those women who just gets on with things, she never complains, so when she first asked for a doctor, we knew there must be something seriously wrong.

“She had been not quite right for a couple of weeks but there were a lot of sickness and diarrhoea bugs around at the time so we didn’t think too much of it.”

On October 12, she had a telephone consultation followed by a personal visit by her GP two days later when Elaine called to say the prescription he had left for it wasn’t having any impact.

The ambulance did not arrive until 11pm
(

Elaine said: “She seemed to be getting a bit worse and was getting tenderness in her stomach. The GP gave her something to help the diarrhoea and gave her anti-sickness medication but because she was still being sick, she wasn’t getting them into her system properly.”

“The out-of-hours doctor came just after 11 and after examining my mum, he said he was going to his car to phone an ambulance.

“My dad said we could put her in the car and take her to hospital but the doctor said not to do that because she would be safer in an ambulance and that it should be here within the hour.

“He also called to speak to a surgeon at the hospital so we knew it must be something serious.”

Over the course of the next few hours, mature student Elaine spoke to the ambulance service a number of times but she said: “They kept saying, ‘We are really sorry the ambulance has been diverted to more emergency cases’.

“I was getting worried because I could see she was deteriorating throughout the day and she was grey.

“We thought that would mean she would get an ambulance quicker but then we got a call saying the ambulance had been diverted to a more serious case.

“I said I had already told them mum was deteriorating. They just said if she deteriorates much more phone 999. I said, ‘How many times do I need to do that’?

“About 8pm they called to say they would upgrade it to an emergency. When a doctor calls an ambulance, you already think it is an emergency.

“I ended up having a bit of an argument with the call handler because she suggested I put mum in the car and transport her to hospital myself. That riled me.

“Had she asked me to do that at 11am, I could have managed it but all those hours later my mum had deteriorated so much she couldn’t even get to the toilet.

“She told me she would get an ambulance as soon as she could. But it didn’t arrive until 11.45pm. By then, she wasn’t even able to speak. I believe mum wasn’t treated as seriously as she should have been.”

After admission, Letitia has had two emergency operations after she was discovered to have cancerous growths on her ovaries and peritonitis – a potentially fatal inflammation of the tissue which lines the abdomen. She is also suffering from pneumonia.

She remains in a serious condition in hospital.