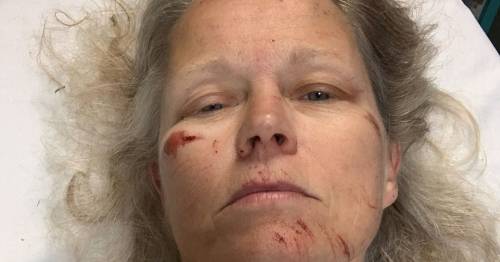 Woman, 55, left with life-changing injuries after being trampled by herd of cows

A former army officer has told how she cheated death but was left with life-changing injuries after being trampled – by a herd of cows.

Janicke Tvedt, 55, said she thought she was going to die in the terrifying ordeal when the animals feared her labrador, Goose, 8, was a threat to their calves.

The mum-of-two was left with seven broken ribs, hoof marks on her chest and legs and needed part of her colon removed following the terrifying ordeal last July.

The ex-army officer, who served in Bosnia, stumbled across the seemingly harmless 30-strong herd with her partner, David Hood, 57, and their labrador in rural North Yorkshire.

The woman after being attacked last July
(

Janicke was airlifted to hospital
(

But within minutes, she had been pulled down and pinned against a fence as the "snorting" animals viciously stamped on her body, leading her belly to swell up like a "watermelon".

She only managed to escape when her army training kicked in and she went into "survival mode".

She climbed a tree, where she slipped in and out of consciousness before finally being airlifted to hospital.

But even after reaching the welcome arms of medical teams, shocked Janicke still believed that she was going to die due to the severity of her excruciating injuries.

She said: "I was convinced I was going to die. I was trying to get in contact with my son because as far as I was concerned, that was it – I wasn't going to see anyone again.

"Had there been a child or an elderly person there, they would not have survived – that's how serious the attack was."

The field where Janicke was attacked
(

Now Janicke, who followed a farmer's gatepost instruction to keep her dog on a lead, is urging those who find themselves in a similar situation to let their pets run free.

"It's the dog that's the issue. They see it as a predator."

Janicke, who now works as a life coach, had set out on the walk with her partner and their dog close to the market town of Masham, Near Harrogate, on July 25 last year.

It was a footpath that she'd taken before without incident, but on this occasion, as she rounded a hedge, she came face to face with a horned cow and its two calves.

Janicke said: "The cow was obviously startled by us, so she bolted directly at the dog, who was on a lead. She kicked the dog, and the dog ended up rolling on the ground.

Janicke with her labrador Goose
(

"Then loads more cows came to her defence. They pinned us against the hedge. I had the dog very tightly on the lead, which is what I thought I was supposed to do.

"I stood there really still with my partner, not trying to be aggressive towards the cows, and after about ten minutes of sniffing us, I thought they were going to leave.

"Then a white one attacked the dog again, but in doing so, it hit me in the knees as well, and knocked me to the ground."

Now lying flat on her back, the cows took it in turns to viciously trample Janicke while her distraught partner watched on helplessly.

She said: "One of them, the black one, kept raising itself up on its hind legs and then stamping its front legs actually down on me.

"It trampled me at least four times on my abdomen and chest, and then once of my face, but I had my arm across my face.

The woman was left with seven broken ribs
(

Some of the injuries the woman suffered
(

"I've still got a mark on my cheek where I think it crushed my glasses into my face.

"Then one of them knocked another over, and it fell and landed on my legs, and then did a complete body roll over my body.

"So I was crushed by the weight of it – these were absolutely massive rearing cattle, with horns."

She added: "I was terrified. Apparently, I was shouting at the cows. But they were snorting, mooing and grunting. They were pawing their hooves on the ground."

When the cows briefly dispersed, Janicke became fully aware of her terrible injuries.

She said: "I had to put my head between my knees to get blood to my head because I kept blacking out, and I knew then that something was seriously wrong.

"My abdomen was like a watermelon. It was swollen and distended and really quite solid – not normal and squishy. I was in such pain in my chest."

She now works as a life coach
(

But it wasn't long before the cows returned, so Janicke and her partner then had to climb a tree as they became surrounded once again.

She said: "My partner was having to hold me up, and we were there for about 20 minutes. And I passed out three times while I was in the tree.

Janicke said her "survival instinct" from her days as an officer in the Royal Electrical and Mechanical Engineers "kicked in" to help her plan their escape.

She said: "Clearly, I wasn't able to walk, but I was explaining to Dave how he was going to go for help, as I realised I'd lost my mobile phone in the attack.

He then went through the next field again to Masham golf course and got somebody off there who had a phone to call for the ambulance, and then the Yorkshire air ambulance came.

In hospital, Janicke was sedated and required an emergency operation to remove part of her colon that had "died" as a result of the attack.

She then needed to have a colostomy bag fitted, which she still wears today.

When she finally came round two days later, in a delirious state, she was too scared to sleep or self-administer her morphine drip as she believed she "wouldn't wake up".

In the months that have followed, the 55-year-old who previously swam three times a week and walked up to 8k each day has begun to build up her strength again.

In October, she joined a gym and can now bend down to the floor and get up again. But despite remaining "very driven", she knows there will be limitations to her mobility from now on.

She said: "I've had to accept what I can and can't do. That's been really hard.

Previous : Woman puts baby up for adoption after sperm donor lied about his ethnicity – World News
Next : Prince Andrew has three options in sex case legal battle and all are unappealing