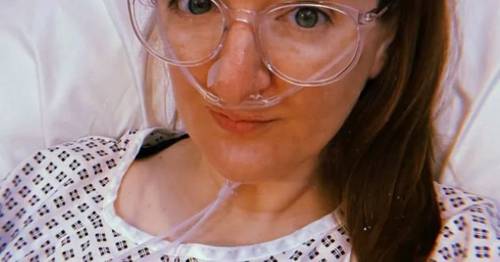 Woman, 32, told burning leg pain was ‘sprain’ but it was sign of something worse

A woman who was told she had a "sprain" in her leg found out it was a tumour in her spine.

Sarah Matthews, 32, described a "burning" and "shooting" sensation in her leg that would only happen at night.

Sarah, from Warrington, said the only way she was able to get rid of the pain was to walk around her flat "for hours".

She told the Liverpool Echo : "It was only ever in my left calf, never in any other part of my body. Never my right leg, it was always affecting my left leg.

"It used to be this burning, shooting sensation and whenever I got that pain, I couldn't sit down, sit still with my legs straight. I literally had to walk around my flat for hours.

Sarah Matthews learned she a had a rare tumour
(

"As soon as I sat down again, I could feel this sensation and it was absolutely agonising. I would be walking around my flat for about four hours from 1am to 5am, just aimlessly while my partner at the time was trying to sleep.

"I would just be walking around as this was the only way I would get some relief from it. I would try and put a hot water bottle on it and initially thought it was restless leg syndrome or something or some sort of sciatica."

Sarah said she spent "two and a half years" trying to figure out what was wrong.

Sarah, who was living in London at this time, claims her doctors told her because she hadn't done any exercise which could have caused this pain.

They sent Sarah away saying she had a sprain.

When Sarah moved back to Warrington, the pain was "at an all-time high".

An MRI scan revealed she had a tumour on her spine called schwannoma – this is a rare type of tumour which forms in the nervous system, affecting fewer than 200,000 people.

Sarah was referred to The Walton Centre in Liverpool and doctors told her she was at risk of becoming paralysed due to the tumour pressing and growing on her spine if it was not removed. She had an operation on December 2 last year, less than 12 weeks after finally being diagnosed.

She said: "They said the pain I had been getting was essentially nerve pain and nerve damage from it pressing on my spinal cord. The pain I was getting was my sciatic nerve." Sarah's operation was a success and the tumour in her spine was benign.

However, she now faces an 18 to 24-month recovery and has been left with nerve damage.

Due to the tumours feeding on nerve endings, Sarah said she had to sacrifice one of her nerves in her spinal column during surgery, which has left her with damage.

She said: "I always try and see the positive in things and I know people out there go through way worse. It's just one of those, if you don't stay positive it will just eat you up.

"The pain is honestly is one of the most physically painful things I have experienced in my life and I have endometriosis and that was quite high on the pain threshold dealing with the cramps and the back pain with that, but this is next level."

Sarah has set up a GoFundMe page to help with costs during her recovery.

Previous : Who made these circles in the Sahara?
Next : ‘EasyJet cancelled flight for friend’s 50th birthday because of Champions League demand’