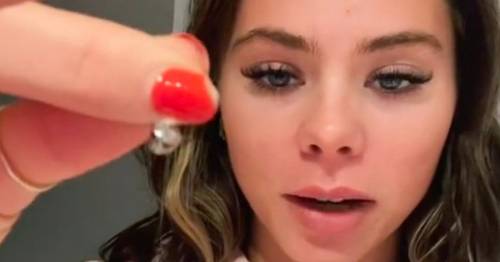 A woman was left mortified when she realised she had her belly button incorrectly pierced eight years after getting it done.

Faith Kelly, 22, went viral on TikTok after revealing how long it had taken her to notice something wrong with her navel piercing.

In the video, that has been "liked" more than 180,000 times, Faith explained how she recently swapped the Swarovksi stud that she had in for a hoop.

She says immediately after replacing the jewellery she felt something wasn't right.

Faith, from Essex, said that is when she realised her navel wasn't pierced at all – but her actual stomach.

She also urged other viewers to not make the same mistake and captioned the video: "Check your piercings right now."

Faith showed shocked viewers where she had been pierced
(

One viewer replied: "You have to have enough skin to pierce through so they should’ve checked that first with their fingers.

"Instead they’ve pierced your actual belly!"

Another added: "SORRY WHAT?!"

Shockingly, this isn't the first time something like that has happened.

Last year, a woman, who goes by the name Tyykidd on TikTok, took to the app to share the results of having her belly button pierced in New Jersey.

"Never get your belly button pierced at the shore. Worst mistake ever," she wrote alongside the clip. "They missed the whole belly button. I want a refund for my time, money & FEELINGS."

In the clip, the woman showed off her belly piercing, which does appear very high – however many commenters pointed out she has a very small belly button, which could mean the piercing would not have fit in the ordinary place.

Previous : Aboriginal activists in Australia fight back against police brutality
Next : World’s most prolific surrogate mum who has had 13 babies gave away her OWN son