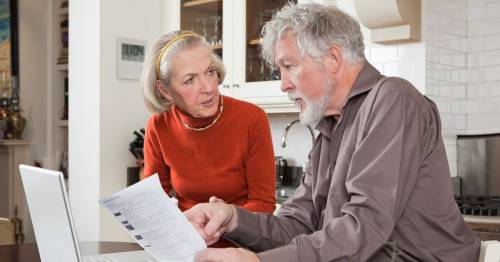 The government is handing out an extra £15billion pot of money to help households through the cost of living crisis.

But while some Brits will get up to £4,200, others could get nothing.

Chancellor Rishi Sunak has been under pressure to help ease the burden of the skyrocketing cost of living, with the average energy bill expected to hit £2,800 a year from October.

Families are also under pressure from record-high prices of petrol and diesel, as well as the fastest rise of the price of food in supermarkets for 13 years.

UK inflation has now hit 9% – a 40-year high – as the cost of living continues to spiral.

The chancellor acknowledged that high bills are causing "distress" for people in the country, telling MPs: "I know they are worried, I know people are struggling."

Do you recieve no government help towards the cost of living? Message mirror.money.saving@mirror.co.uk

Sunak previously announced a £150 council tax rebate for people in bands A to D, a £200 energy bill loan and an extra £500million to the Household Support Fund to be given out by councils.

Today he unveiled an extra £15billion of help. Almost all Brits will get something – but some will get far less than others, and many will still be left out of pocket.

Millions of people who claim means-tested benefits will get one-off payments worth £650 to help with rising bills.

More than 8million pensioner households will get a one-off £300 'pensioner cost of living payment'.

Pensioners have to get Winter Fuel Payment to be eligible, and the £300 will be added to this benefit when it is paid in November or December.

The £300 payment will not be taxed and won't affect eligibility for other benefits.

But these payments may still not be enough, according to Roshni Patel of accountants PwC.

Patel said: "While the new relief will be welcomed and much needed for pensioners struggling, it is a bandaid over a breaking system.

"Pension contributions are shrinking, and are set to shrink further as the cost of living bites. So we are heading to a position where more and more bailouts will be required as pension poverty grows."

People across the UK who get the following disability benefits will receive a £150 Disability Cost of Living Payment:

Many of this group may also get a new one-off £650 payment unveiled by Sunak for people on means-tested benefits.

But this will still not be enough to help many disabled people, according to Richard Kramer, chief executive of national disability charity Sense.

Kramer said: "The cash will bring immediate relief to many, but the government must ensure measures go beyond the immediate crisis and support disabled people long-term.

"Disabled people and their families already face higher living costs, paying more for essential goods and services, and without long-term dedicated support spiralling costs will continue to push many into debt.”

The extra cash being handed out by the government will help take the edge off the cost of living crisis – but experts say it does not go far enough.

For energy prices alone, in May 2021 most bills were price capped at £1,138 a year for the average home.

The amount of cash the government is giving out varies, but in most cases is far less than £1,662.

For example, a working family on Universal Credit with one parent on the average wage of £27,000 a year and the other on National Living wage will get £4,200 a year from the government.

But a single person not claiming benefits and with a house in council tax band E would get just £400 – leaving them £1,262 a year worse off on energy bills alone.

Some Brits will get no automatic government cash at all – for example, someone working but living in a house of multiple occupation in council tax band E.

This person would not get the £400 energy help, because it would go to the person who pays the energy bill – normally the landlord.

They also would not get the £150 council tax rebate for the same reason.

Sunak has urged struggling people who fall between the cracks of the system like this to try to claim on their local council's Household Support Fund.

But energy is just one part of a cost of living crisis that is seeing bills rise for food, petrol and more.

Financial expert Mrs. Mummypenny said: "This additional support from the government helps with the increases to energy bills but does little to help with other essentials of food and fuel.

"This cost of living crisis isn’t limited to an increase in energy bills. What about the price rises on food and fuel, both a significant part of the inflation, currently edging towards 10%?"

Sunak has previously been reluctant to hand out too much cash to struggling households as he is worried it will drive up inflation.

James Jamieson, chairman of the Local Government Association, said: "These measures must be accompanied by a longer-term solution to addressing wider cost of living pressures, which are not going to end any time soon, and reducing the need for further emergency support."

Motorists have been grappling with soaring prices for petrol and diesel, which hit a series of record highs this year.

Earlier this week diesel prices hit a new all-time peak , with petrol at its second-highest rate, in a major blow to drivers.

But the chancellor made no announcement on cuts to fuel duty, which is currently 57.95p a litre on petrol and diesel.

Sunak said tax cuts could come in the Autumn Budget later this year, but gave no further details.

People who get Housing Benefit risk losing out on the £650 one-off payment given to all other means-tested benefit claimants unless they contact their local council.

This is because, if you get Housing Benefit but no other state support, the government cannot find you to give you the money.

Sunak said "It is not possible right now for DWP or HMRC to identify people on Housing Benefit who are not also claiming other benefits.

"So, to support them and others, we will extend the Household Support Fund, delivered by Local Authorities, by £500million from October."

Housing benefit recipients will need to contact their local council to get a share of this cash.