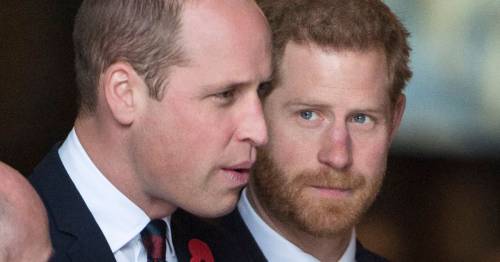 Prince William feels that Harry has been “sucked into an alien world” since leaving the Royal Family and that he “crossed a line” by attacking his family publicly, said a pal.

The fraught relationship between the brothers is clear with little contact during the visit to the UK by the Sussexes for the Queen’s Platinum Jubilee earlier this month.

Harry and Meghan left the UK more than two years ago and have now started a new life in California where they have been critical of the royals in interviews with US media.

The Duke of Sussex claimed in a bombshell interview with Oprah Winfrey that he needed to break the cycle and bring up his children in a different environment.

While Meghan Markle also alleged to the American chat show host that she had been subject to a racist comment.

William is said to be angry for his wife who he feels was “massively disrespected” by Meghan in that same interview, when she claimed that Kate had made her cry in the run up to her wedding.

Meghan had told Oprah that Kate had bought her flowers later to apologise.

But a royal insider told the Daily Mail : “It obviously never occurred (to Meghan) that they were a peace offering, not an apology. Despite much provocation both William and Catherine have tried to keep the peace more than anyone will ever realise.”

William feels that Meghan "massively disrespected" Kate in an interview with Oprah, it is alleged
(

When a friend was asked whether the brothers will ever be able to heal their rift, they said that it was a difficult question as William feels that Harry “crossed a line”.

The source said: "William is also very principled and believes Harry has crossed a line. He’s thrown accusation after accusation, knowing that silence is the family’s only option because it doesn’t want to get dragged into a public slanging match. He sees how upset his father has been by it all, and it hurts.

A source said that William still feels "protective" towards his brother
(

"William is absolutely allergic to drama, but Harry has ensured that the family laundry is being aired on a global scale. I think they will find themselves in a better position in the future, but not now. And too much water has gone under the bridge for things to ever go back to the way they were.

"Truthfully, William thinks Harry has been sucked into an alien world and there’s f*** all he can do about it. But he does want Harry to be happy, and if he stops throwing dust in their faces, then maybe he will find a way to forgive and forget."

Another source did tell the Daily Mail that they feel it is a possibility that they can make up as William remains “very protective” of his brother and thinks he’ll “keep the door open for him forever.”

Previous : Inside one of UK’s most deprived areas where people turn off fridges to save money
Next : “Clytaemnestra,” Reviewed: A Tyrannical Director Looms Over a Backstage Hothouse