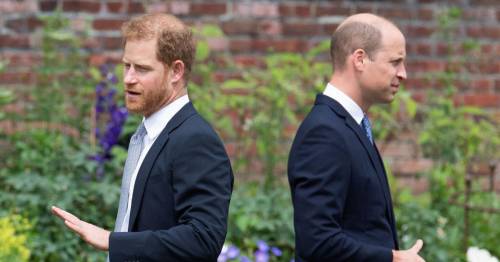 The Duke and Duchess of Cambridge's birthday message to Prince Harry was "curt" and showed the frosty relationship between the two brothers, a royal expert has claimed.

Harry is celebrating his 37th birthday today in the United States, where he lives with wife Meghan Markle and their children Archie and Lilibet.

As is tradition, various members of the royal family took to their official social media accounts to send birthday wishes to Harry.

On their Twitter account and on their Instagram stories, William and Kate shared a picture showing just Harry with the message: "Happy Birthday Prince Harry!" and a balloon emoji.

It comes amid a feud between William and Harry, which was reportedly sparked by William's concerns over Harry's fast-developing relationship with Meghan ahead of their royal wedding in 2018.

In an interview with Oprah Winfrey in March, Harry claimed William was "trapped" within the royal system – which is said to have left William furious.

And royal author Duncan Larcombe told The Sun that William and Kate's "curt" message to Harry "only serves as proof the ice between the brothers has still not thawed".

He explained: “Short of ignoring the Duke of Sussex’s 37th landmark completely, their social media post was the bare minimum from a couple who once welcomed Harry as their official Royal gooseberry.

“If anything, this year’s birthday wishes from the Cambridges are an indication of just how far relations between the two warring clans have deteriorated over the past 12 months.”

Prince Harry's birthday wishes from William and Kate in 2019
(

Duncan pointed to previous birthday wishes to Harry that the Cambridges posted on social media in years gone by.

Last year, on Instagram, they shared a fun picture of William, Harry and Kate taking part in a running race with the caption: "Wishing a very happy birthday to Prince Harry today!"

While in 2019, they posted a lovely picture of William and Harry smiling together at Harry's wedding to Meghan the previous year.

This year, Duncan says he was surprised William and Kate's account did not use a picture from the last time the brothers were together – at the unveiling of a statue of their mother Princess Diana in July.

He explained: "That would have sent a message of unity and the shared common bond between siblings who were once as thick as thieves."

Other royals wishing Harry a happy birthday were Harry's grandmother the Queen and his dad Prince Charles.

While Charles and Camilla took to the social media platform to say: "Wishing The Duke of Sussex a very Happy Birthday today!"

It was accompanied by three touching pictures of the Prince of Wales with his youngest son over different stages of his life.