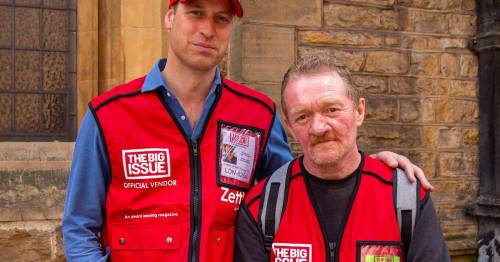 Prince William has pledged ahead of his 40th birthday to continue “shining” a light on the “solvable issue” of homelessness – and to introduce his children to charities supporting rough sleepers.

William is the cover star of the latest issue of the Big Issue after he joined a seller on the streets of London earlier this month, and has written an article for the magazine about his experiences.

He described his time with vendor Dave Martin as “eye opening” and said he was recognised by those who stopped to buy the magazine, which allows the homeless to earn income by selling the publication.

In a question-and-answer article with Mr Martin, the duke, who turns 40 tomorrow, described the Queen’s Platinum Jubilee celebrations as a “lovely weekend” that provided a “moment of national unity” after a “difficult couple of years”.

Writing for the magazine, he said about the issue of homelessness: “And while I may seem like one of the most unlikely advocates for this cause, I have always believed in using my platform to help tell those stories and to bring attention and action to those who are struggling. I plan to do that now I’m turning 40, even more than I have in the past.

“So, for my part, I commit to continue doing what I can to shine a spotlight on this solvable issue not just today, but in the months and years to come.

“And in the years ahead, I hope to bring George, Charlotte and Louis to see the fantastic organisations doing inspiring work to support those most in need – just as my mother did for me.”

Diana, Princess of Wales brought William to a homeless shelter when he was aged 11 to broaden the future king’s horizons and today he is patron of the homelessness charities Centrepoint and The Passage.

Wearing a red vendor’s vest and baseball cap and official accreditation on his chest, the duke joined Mr Martin, who had volunteered to show William the ropes, outside a Sainsbury’s Local in Victoria, a 10-minute walk from Buckingham Palace.

Wearing a red vendor’s vest and baseball cap and official accreditation on his chest, the duke joined Mr Martin, who had volunteered to show William the ropes
(

News about the famous Big Issue seller soon spread through word of mouth and a queue formed, with people eager to meet the future king. But they had to buy the magazine and 32 copies, which would normally take his guide a week to sell, were snapped up in under an hour.

During his time on the streets, William chatted to a number of people who fled the war in Ukraine and he told the magazine: “We met two Ukrainian refugees.

“The daughter lives here, she’s brought her mum from Kyiv. Sadly they’ve lost a number of family members and most of their property.

“The grandmother is still out there.

William and Kate with their three children George, Charlotte and Louis alongside the Queen on the balcony of Buckingham Palace
(

“And then there was another gentleman who undid his shirt like Superman with a Ukrainian logo on there. He’s got his whole family over here and they’ve lost everything.

In the question-and-answer session, William suggested momentum for tackling homelessness, fostered by the

Everyone In initiative where rough sleepers were moved into accommodation at the start of the pandemic, may have been lost – but he remained optimistic.

He told Mr Martin, 60, a Big Issue seller for 11 years: “I felt my birthday was a good opportunity. I wanted to make sure we were highlighting something that matters to me.

“Off the back of Everyone In, it started to feel that actually, this issue isn’t quite as big to tackle as we think. But it feels like it’s gone back to what it was before the pandemic.

“We can fix it. It is possible to – I never want to say completely end homelessness, because every day something else might happen for someone – but get on top of it more than we have done.”

He spoke about Diana’s influence on his public work, as they chatted at The Passage, a homeless charity based a few minutes walk from where they sold the magazine.

William said: “Ever since I came here with my mother, homelessness has stuck with me as an issue I want to fight for.

I’ve done everything I can to raise the profile of the homeless, and I want to do a lot more.”

Asked by Mr Martin about the Jubilee celebrations, the duke replied: “It was a lovely weekend, thanks. It was a moment of national unity, I felt. I think it brought a lot of people together. I think it made everyone feel a bit better about themselves after a difficult couple of years.”

Previous : Logan Paul claims gun was drawn during altercation with rival Dillon Danis
Next : Man recorded himself saying ‘I will kill your children’ before ploughing into schoolkids