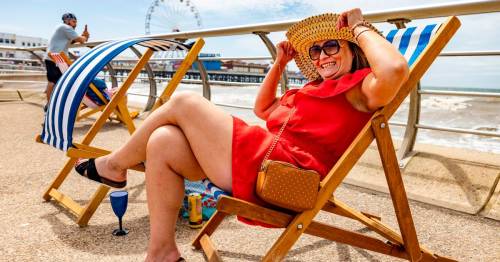 Will there be another heatwave in June? Bookies’ odds shorten after 32C highs

Brits will be hoping for another heatwave as the nights officially begin to draw in after today, the summer solstice.

Plenty of people enjoyed basking in the sunshine last week as a heatwave baked the country with 32.7C highs.

Though not technically a heatwave, the warm weather was a welcome sight after a somewhat drizzly Platinum Jubilee weekend of celebrations earlier this month.

The Met Office is currently predicting a period of warm weather to come back, but if this will be a heatwave remains to be seen. It also warns climate change is "making these events more likely" in the future.

It said: "[A heatwave] is 30 times more likely to occur now than before the industrial revolution because of the higher concentration of carbon dioxide (a greenhouse gas) in the atmosphere."

Will there be another heatwave?

Last week saw the hottest day of the year so far
(

Brits can expect warm weather with a peak expected on Thursday June 23 in the South East and expected temperatures of 30C.

However, last week's warm weather was not technically a heatwave as only London recorded higher than average temperatures.

A heatwave is when "a period of at least three consecutive days with daily maximum temperatures meeting or exceeding the heatwave temperature threshold".

This did not happen in most areas of the country, so it was not a heatwave.

Met Office spokesman Grahame Madge told the Mirror: "The pattern is that heat will again continue to build as we go through this week towards Thursday which we expect to be the day of peak heat."

Madge said temperatures could reach around 26-27C by Wednesday, though the weather boffins are keeping an eye on thunder conditions after the period of warmer weather.

He said: "We’re keeping a watching brief on that, we’re not planning to release any warnings. There's a chance of heavy showers, and some could be thundery and impactful."

For Thursday until June 26, the Met Office said: "Mostly dry on Thursday and warm, locally hot in the south. Turning unsettled on Friday and Saturday with showers, heavy locally thundery and some longer spells of rain. Becoming cooler."

Is this the hottest ever June?

Odds on the hottest June have been slashed
(

This is not the hottest ever June recorded, but odds have been slashed on this happening after last week's warm weather.

The hottest ever June day recorded was 35.6C at Southampton Mayflower Park in 1976 and we have come close this year with recorded highs of 32.7C in London on June 17.

Alex Apati of Ladbrokes said: "There's plenty more of where last week's high temperatures came from if the latest odds are anything to go by."

Previous : How William has gone from handsome prince to King in training as he turns 40
Next : Couple dating for two years find out they could share a dad and may be sisters – World News