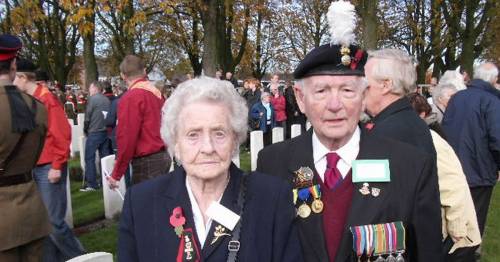 The 93-year-old widow of a World War Two solider died after falling on her way to lay a wreath at a service to mark the 75th anniversary of a battle which he served in.

Urcella Millward regularly made the journey with husband Michael to Den Bosch in Holland to mark the battle where 146 of his regiment were killed.

After he died, the mother-of-13 carried on the tradition and would go there with family to pay tribute to his fallen friends.

But a simple fall on the way to the ceremony ended in her breaking her hip and having to be admitted to hospital.

Her son Des, who accompanied her on the trip to Holland, described how she looked forward to the annual visit as they had so many friends there.

Michael Millward served in the Royal Welch Fusiliers who played a major part in the liberation of Den Bosch in October, 1944.

Des said his mother was fit and active – and the night before the cathedral service was dancing with friends.

She took his arm as they walked from the coach but stumbled over a kerb, breaking her hip.

“I grabbed her to prevent her from hitting the ground but her hip hit the ground,” he said.

Mrs Millward, of Wrexham, North Wales, had surgery on her fractured hip in Holland and was transferred by private ambulance to the Maelor Hospital, Wrexham.

Des Millward said she was expected to return home after a period of rehabilitation but the inquest heard that she contracted urinary infections and became very frail. She also had a heart problem.

She died on Boxing Day 2019, and the family raised several concerns with the Betsi Cadwaladr University Health Board about her care and treatment in the hospital.

Michael Millward served in the Royal Welch Fusiliers who played a major part in the liberation of Den Bosch in October, 1944
(

Des Millward said one of the issues was that she did not receive the physiotherapy she should have, but the official explanation was that she was often too weak and frail.

“I feel Mum did not get the care she needed; there was a degree of negligence,” he said.

“She entered hospital in good health and the intention was to have some rehabilitation before going home.”

Members of the family visited her every day but claimed they were not kept informed about her condition.

Respiratory consultant Dr Elizabeth Brohan said the cause of death was respiratory infection due to long-term immobility following the fracture.

Recording a conclusion of accidental death, John Gittins, senior coroner for North Wales East and Central, said the fall had been the catalyst for the problems which followed.

“Despite being a fit 93 she was, after all, 93 and her ability to overcome what would have been a significant trauma was compromised,” he said.

Previous : Saudi tourism fund invests over $500 mln since last year – statement
Next : ‘I got spiked in Freshers Week while out with pals – I couldn’t stand, speak or see’ – Lauren Whitehead