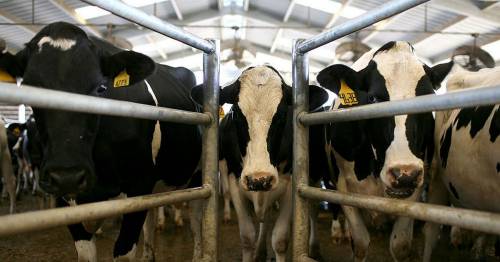 A widow whose farmer husband died in a tragic cattle accident has spoken of her heartbreak.

Fernley Baker, 70, was killed by his own cows when they rushed out of their trailer, sending him crashing to the ground.

The tragic accident came just as Mr Baker delivered his cows to auction at Exeter, Devon, to shed much of his workload in preparation for his retirement.

Now his grieving wife, Grace Baker, 69, speaks on the man she truly loved as she spent 30 blissful years of marriage together.

She said: said: "I am heartbroken and devastated – I really am.

"We were very very happy. It is a terrible end. It has been a horrible end to a happy life. He died from head injuries."

Mr Baker had never had an accident whilst farming for over 60 years.
(

The loved up partners had attended school together but got engaged to different partners.

But as those relationships failed, they found themselves back in each other arms again to enjoy 30 happy years of married life.

Mr Baker was rushed straight to the hospital after the unsuspected accident, but could not recover from his injuries and died just nine days later.

The accident came as a shock Mr Baker had dealt with thousands of cows in his life and never had an accident.

Grace said: "We were giving up cows. We only had three cows left and that was one. I have just sent off the other two (for auction)

"This is the first time anything like this has ever happened. He had been in farming all his life – for nearly 60 years."

An inquest into his death will be held in February.

The Health and Safety Executive is holding a probe into the accident.

Previous : Prince Charles urged to take on more royal duties while Queen advised to rest
Next : BREAKING Daughter’s desperate plea as man killed in ‘hit-and-run’ near I’m A Celeb castle