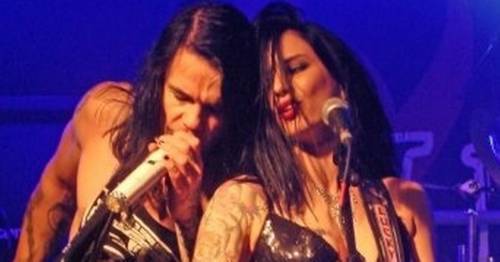 A woman whose fiancé died after getting the Covid-19 jab claims she has received the first Covid vaccine damage payment of £120,000.

Lord Zion, 48, died in May 2021 days after receiving the AstraZeneca jab.

The Covid-19 jab has been proved to be safe for the vast majority of those who get it.

But a very small number of people suffered from blood clots and myocarditis as a result of the jab – prompting the Government to change the eligibility criteria for this vaccine to protect people.

Most side effects are mild and go away within a few days.

The UK government has previously stated: “If side effects such as pain and/or fever are troublesome, they can be treated by medicines for pain and fever such as paracetamol."

However, those who died as result of the AstraZeneca vaccine are entitled to file for claims.

Vikki told GB News she had been paid in compensation and said this was the “first step in the battle”.

Vikki said: "This isn’t about money as nothing can bring back the people we have lost. This is about recognition.

“I think it is disgusting that widows and injured people have had to fight for a year to get this support, we aren’t finished yet.”

Vikki said she was forced to take out loans to cover costs after he died.

She added she also had to borrow money from her family to pursue the claim.

Vikki said the final pay-out was not acceptable, claiming the amount hasn't risen since 2007.

Vikki Spit has received compensation after Zion died from the jab

She explained her household income had "massively dropped" since Zion's death.

Vikki added she applied for the scheme in June 2021, but wasn't awarded the compensation until last week.

Zion had suffered from an "excruciating" headache after his injection, Vikki previously told the BBC.

She told the BBC in November: "We have been together for almost half my life – it's literally like having half of yourself ripped away, especially when it happened so suddenly.

"There are people who are really struggling and finding it really difficult, all because they just did the right thing.

"They did what the Government was telling us to do – to protect everyone, to bring the country back to normal, and their lives have just been shattered."

The couple, who were in the band Spit Like This, were due to get married in 2021.

In February, we reported how more than 500 people are seeking compensation for problems caused by Covid jabs – and that number could soar into the thousands.

Victims of severe side effects can apply for up to £120,000 under the Vaccines Damage Payment Scheme.

"The NHS Business Services Authority (NHSBSA) has now started to receive outcomes from the independent medical assessor for the first batch of COVID-19 related claims sent for assessment. We will contact each claimant directly as soon as we have an update on their individual claim."

“The NHS Business Services Authority (NHSBSA) has now started to receive outcomes from the independent medical assessor for the first batch of COVID-19 related claims sent for assessment.

“We will contact each claimant directly as soon as we have an update on their individual claim.”

The Mirror contacted the Department of Health for comment.