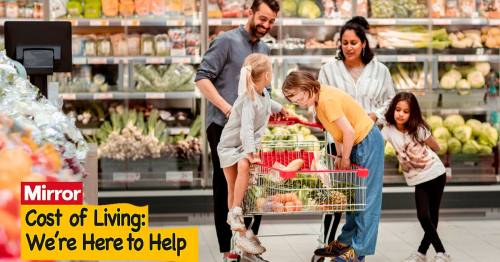 The average food bill could rise by £271 this year as the cost of living crisis continues to bite, shoppers have been warned.

Research company Kantar suggests grocery prices were 5.9% higher in April than a year ago – marking the biggest increase since December 2011.

Fraser McKevitt, head of retail and consumer insight at Kantar, said: "The average household will now be exposed to a potential extra £271 per year.

"A lot of this is going on non-discretionary, everyday essentials which will prove difficult to cut back on as budgets are squeezed.

“We're seeing a clear flight to value as shoppers watch their pennies."

Why is your supermarket shop getting expensive?

Supermarket shoppers are being hit by soaring inflation, with suppliers passing on the rising increases of costs to consumers.

Inflation hit a new 30-year high of 7% in March – but the Bank of England has predicted that it could peak at around 8% later this year.

Inflation is a measure of how much the prices of goods and services have changed over time.

Disruption to supply chains since the Covid pandemic and the Russian war in Ukraine are also pushing up food prices.

Are you struggling with rising supermarket costs? Let us know: mirror.money.saving@mirror.co.uk

The data from Kantar also highlighted how shoppers are opting to go to budget supermarkets such as Aldi and Lidl to save money.

Aldi was the fastest growing retailer during the period the data covers, with its sales increasing by 4.2% over 12 weeks to 17 April. Lidl was just shortly behind and was up 4%.

Both retailers saw more than one million extra shoppers visit over the period compared with this time last year – highlighting how more shoppers are being conscious with their spending.

Tesco was the only other retailer to increase its market share, growing by 0.3 percentage points to 27.3% of total grocery sales.

Kantar said food prices were rising fastest in markets such as dog food, fresh lamb and savoury snacks, but were falling in spirits.

Tesco is allowing shoppers to purchase only three items each, while Waitrose and Morrisons have restricted shoppers to two items each.

The limits include olive, rapeseed and sunflower oils, with restrictions being placed both in-store and online.

The product limits are linked to the ongoing Russian invasion of Ukraine. Both countries produce most of the world's sunflower oil and the war is disrupting exports.

The price of cooking oils in shops reportedly around 20% higher than they were a year ago.

Previous : Mother of 2 dead babies found decades ago enters Alford plea
Next : Mum makes £4,000 without leaving her home using two websites – and says you can too