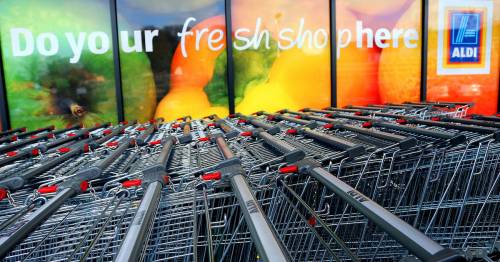 Why Tesco, Aldi, ASDA, Lidl and Sainsbury’s shoppers should never use the trolleys

Shoppers at big UK supermarkets such as Morrisons, Sainsbury's, M&S, Lidl, ASDA, Tesco and Aldi are being advised not to use the trolleys – as experts say the simple change could save you £100 a year.

If using a basket instead of a trolley, supermarket shoppers can't carry as much and therefore are likely to spend less.

The basket also means shoppers are more aware of what they are buying as they don't have as much space as a trolley, reports the MEN.

Other changes to help cut your supermarket bill include taking the "downshift challenge".

This means trying swapping branded goods for supermarket-own labels as they are cheaper – this could mean a saving of up to 30 per cent.

If using a basket instead of a trolley, shoppers can't carry as much and therefore spend less
(

Shoppers are also advised to look down different aisles as they may be able to find cheaper versions of the same products in the world foods section, for instance.

As an example, previous research from MoneySavingExpert found cotton buds can be 20 per cent cheaper in the baby aisle.

Herbs and spices can also be found for under half the price in the world food section.

Loyalty cards can also be a tool to save money. Being free to sign up, these loyalty schemes give you money back, normally in the form of points, each time you shop.

So if you’re spending money at that particular grocer anyway, it doesn’t make sense not to have a loyalty card.

Shoppers are being told to avoid using trolleys. Pictured are trolleys at a Tesco supermarket
(

Tesco now offers cheaper prices for shoppers who are signed up to its Clubcard scheme.

Another tip is to avoid shopping in convenience stores as they are more expensive than big shops.

Which? says shopping in smaller shops could be costing you an extra £300 each year.

The consumer champion said households spend up to £10.20 more each week at a Sainsbury’s Local rather than a regular Sainsbury’s supermarket.

Meanwhile, a basket of groceries from Tesco Express cost on average £279 more over 12 months.

Yellow stickers are another great way to save cash and cut down on food waste.

The exact time each supermarket starts reducing its products does vary – get familiar with your favourite store’s routine so you know when to visit.

Finally, shoppers are advised not to go to the supermarket with an empty stomach.

If your tummy is rumbling, you're more likely to pick up unwanted snacks that you don’t really need.

Try to shop alone as well, to avoid other people influencing your food buying decision.