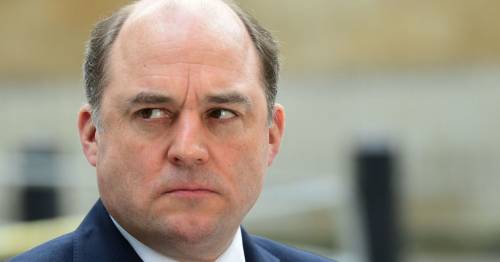 Who is Ben Wallace? Marriage to ex-assistant, recovering Diana’s body and torture comments

Ben Wallace is among the list of Tories tipped to take over from beleaguered current Prime Minister Boris Johnson.

The Defence Secretary has received some praise for his work with Ukraine since Vladimir Putin's barbaric invasion, arguably raising the importance of the role since war broke out as Britain supplies the Ukrainian army with weapons.

The PM has has a tumultuous few months of his own making and may now face a few more worried Conservative members and MPs after losing the by-elections in Wakefield (to Labour) and Tiverton and Honiton (to the Liberal Democrats).

A no-confidence vote brought by his own MPs found that he had lost the backing of 41% of his colleagues – but 1922 Committee rules mean he cannot be challenged again for a year.

After a string of sleaze allegations against the government, Partygate, the damning Sue Gray report, catastrophic by-election results and an upcoming report by the House of Commons' privileges committee, Johnson's position remains under threat.

So who is Ben Wallace and could he take over as PM?

Who is Ben Wallace?

Ben Wallace is the current Defence Secretary and MP for Wyre and Preston North since 2005. He recently met Ukrainian President Volodymyr Zelensky and said Putin was “mirroring the fascism” of the Nazis.

Typically conservative, Wallace says he "is a firm believer in small government" and has been known to be among a group of MPs who are staunchly behind Johnson remaining PM.

Wallace's first venture into politics was actually in the Scottish Parliament as a Tory MSP for North East Scotland from 1999 to 2003, before he moved further south to Lancashire ahead of the 2005 general election.

A former remainer who voted for Theresa May's Brexit deal, his young life was one of privilege, attending the prestigious private Millfield School in Somerset. Alumni, known as 'Old Millfieldians', include the likes of Lily Allen, Rose Leslie, Lando Norris and John Sergeant.

After Millfield, Ben attended the Royal Military Academy at Sandhurst before embarking on a military career that took him into the Scots Guards in 1991 after a brief stint as a ski instructor.

He is godfather to the eldest child of fellow Tory Lancashire MP Jake Berry.

One former army colleague described Wallace as a man who "worked hard and played hard", while Berry claimed the former soldier held one remarkable record as a soldier.

The Rossendale and Darwen MP said: "I think Ben still holds the record of the largest ever mess bill; the most alcohol consumed in one night."

His service in the army took him to Germany, Belize and Cyprus, before he was named in dispatches for an incident with the IRA in Northern Ireland.

British troops were natural targets for the sectarian paramilitary and he told the BBC's Nick Robinson of his fright when he was the man who discover a terrorist bomb.

He said: "There it was right in my face. I remember the police officer next to me said, ‘It’s the effing real thing.’”

The Ministry of Defence has faced a number of major challenges in recent years such as the war in Ukraine and the hasty and much-criticised withdrawal from Afghanistan.

During the frantic evacuation, Wallace admitted some people would not be able to get out as the Taliban advanced.

An MP since 2005, Ben Wallace has been behind some controversial comments and policy stances in the past, such as some unearthed comments on torture.

In 2003, comments were made by Wallace in which he appeared to condone the use of mock executions where a solider taken as prisoner might be "manhandled fairly roughly" as "absolutely the norm".

He argued that soldiers were taught this is how it was done and they "might pretend to pour petrol" on a prisoner.

He said: "I would defend the right of soldiers to interrogate at the point of capture, swiftly and sharply because that’s when you get the most information.

"That is not a war crime. Where there’s still a threat to our forces, you need to know information quickly. If that man had been given a cup of tea, would he really have told about his weapons under the floor?"

Wallace's support of Johnson seemed to be behind a remarkable blasting of fellow cabinet member Michael Gove, who infamously put a dagger in Johnson's back and his leadership hopes in 2016.

The Defence Secretary ranted: "Michael seems to have an emotional need to gossip, particularly when drink is taken, as it all too often seemed to be.

"UK citizens deserve to know that when they go to sleep at night their secrets and their nation’s secrets aren’t shared in the newspaper column of the prime minister’s wife the next day, or traded away with newspaper proprietors over fine wine."

Though earning a mixture of praise and criticism for his role as Defence Secretary, Wallace was arguably vindicated in his initially controversial comments over the West's approach to Russia in which he said there was a "whiff of Munich in the air". It was a reference to the failed negotiations of the like of Britain and Neville Chamberlain in the run-up to World War Two.

Wallace's comments were made in mid-February, and Putin caused the deaths of thousands of innocent people by starting his war in Ukraine later that month.

A BBC Radio 4 profile of him told the story of how Wallace was one of the "main army personnel" tasked with recovering the body of Princess Diana after her fatal car accident in Paris in 1997. Berry claimed Wallace was there when the two young princes, William and Harry, were taken in to see their mother's coffin.

Despite saying he is on the "left of the party", Wallace voted against the introduction of gay marriage in 2014.

Who is Ben Wallace married to?

Ben Wallace has been married since 2001
(

Ben Wallace is married to his wife Liza Cooke and the two met when she was working in his MSP office in Scotland.

She worked as a part-time parliamentary assistant in his office until April 2019. They now have three children and live in Lancashire.