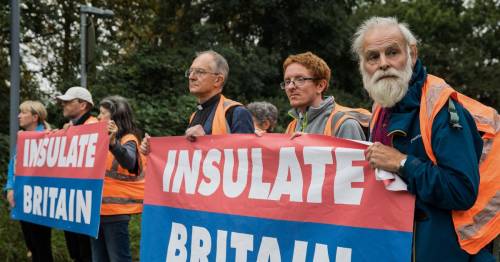 Who are Insulate Britain and why do they keep stopping traffic?

Insulate Britain – a sub-group of Extinction Rebellion – have made headlines for their disruptive motorway protests in recent weeks.

The first demonstrations took place on 13 September, where protestors blocked the M25 motorway.

Many commuters were left angry at the inconveniences caused.

A YouGov poll asking the question 'Do you have a favourable or unfavourable view of Insulate Britain?' was asked and only 3% answered 'very favourable'.

13% gave an answer of 'somewhat favourable' and 17% said Insulate Britain are 'somewhat unfavourable'.

36% of the people who answered the survey believe the group to be 'very unfavourable'.

Home secretary Priti Patel used the events to further her cause for the increase in police powers to combat protesting, which has drawn severe criticism due to fears the planned laws infringe on people's human right to free expression.

Patel said: "Measures already going through Parliament will ensure these criminals can be brought to justice for the disruption they are causing.

"But we are going further to close down the legal loopholes exploited by these offenders."

Who are Insulate Britain and what are their goals?

Insulate Britain began in August and are separate from the like of Extinction Rebellion in that their goals are far more specific.

Their primary aim is to force the government to look at insulating Britain's 'leaky' homes.

Much of Britain's energy emissions are caused by homes that are not energy efficient. According to the National Housing Federation, England’s homes produce more carbon emissions every year than is produced by all of the country’s cars.

They said: "Nearly 15% of the UK’s total emissions comes from heating homes: an overhaul of the energy performance of the UK’s housing stock is needed to reduce the energy demand.

"In order to meet UK commitments under the Paris Agreement to stay below 1.5C, and legal obligations under the Climate Change Act 2008, as amended in 2019, emissions from heating and powering homes must be reduced by 78% in less than 15 years and then to zero by 2050."

Their target is expensive and the Climate Change Committee believes that retrofitting the estimated 26 million homes would cost around £26,000 each. This is an overall price tag of £676 billion.