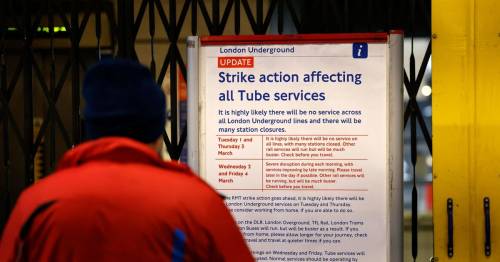 The RMT train strike is almost upon us, as the nation braces for a tough week of chaos.

Disruption is expected to be widespread, with people having to rethink their travel plans entirely.

In the southwest, people hoping to ride rail lines to Glastonbury festival have been left scrabbling to find lifts in cars and even bicycles to avoid the anticipated picket.

In total, 13 rail operators are planning to participate in the walkout, along with staff from some parts of Network Rail.

As a result, all operators are expected to be affected by the strikes, including in the days between the official strike dates on Tuesday June 21, Thursday 23 and Saturday 25.

The London Underground is also expected to be affected on June 21 as members of the RMT and Unite unions walk out over a variety of issues from pay rises to job cuts.

Which rail lines are running during rail strike?

Passengers are being urged not to travel
(

National Rail has produced a map showing which rail lines will still be maintaining at least some service for the duration of the strikes.

A map of the routes that will still operate to some degree can be found here.

Which rail companies are striking or will have limited services?

Read on for details on which train providers will be affected by the strikes, as per National Rail or the relevant provider.

“Fewer trains will run and some stations and destinations will have2 no service on the strike days. Services will also start later in the day and end much earlier."

C2c – “c2c expect significant disruption on the strike dates, and on those days in between.”

“This means that Caledonian Sleeper have had to cancel all services from Monday 20 June to Friday 24 June inclusive.”

“No Chiltern Railways services will operate from 21 to 25 June inclusive north of Banbury, or to and from Oxford.”

“Days either side of the industrial action are also expected to be affected.”

East Midlands Railway – “Will be operating a significantly reduced service on these dates.”

Elizabeth line – “London Overground services will only run between 07:30 and 18:30 on these days.”

Gatwick Express – “Although GTR colleagues are not on strike, this national action will severely affect all journeys on Southern, Gatwick Express, Thameslink and Great Northern between Tuesday 21 June and Sunday 26 June.”

“Reservations are compulsory on those days and customers without reservations will not be permitted to board.”

Great Northern – “Although GTR colleagues are not on strike, this national action will severely affect all journeys on Southern, Gatwick Express, Thameslink and Great Northern.”

Train strikes are expected to affect services in the whole country, including Scotland
(

LNER – “LNER will be running around 38% of their usual trains and they are likely to be very busy.”

London Northwestern Railway – “A very limited train service will run on the strike dates between 07:30 and 18:30 only.

“Due to the knock-on impact of the strike, a very limited service will also be running on Wednesday 22 June and Friday 24 June.”

Lumo – “Lumo will be running an amended timetable.”

Merseyrail – “There will be no Merseyrail train services on Tuesday 21, Thursday 23 and Saturday 25 June.

“Whilst Merseyrail staff are not taking part in this industrial action, it will involve Network Rail staff who operate the signalling systems and provide crucial maintenance which allow services to run safely.”

Northern – Northern is only operating certain routes. They are:

ScotRail – “The planned strikes on those three days will cause disruption to ScotRail services, as Network Rail Scotland signallers and maintenance staff, who are in safety-critical roles, will be on strike.”

Southeastern – “We expect significant disruption across our network. Most of our stations and routes will be closed and we will only be able to run a severely reduced service. Please do not travel.”

Southern – “Although GTR colleagues are not on strike, this national action will severely affect all journeys on Southern, Gatwick Express, Thameslink and Great Northern between Tuesday 21 June and Sunday 26 June.”

Only the following routes will be running:

Thameslink – “Although GTR colleagues are not on strike, this national action will severely affect all journeys on Southern, Gatwick Express, Thameslink and Great Northern.”

TransPennine Express – “An amended timetable will be in place on these dates, which will see a significant reduction in available services.”

The following stations are going to be completely closed:

Transport for Wales – “We’re advising customers not to travel by train on 21, 23 and 25 June, with the majority of our rail services suspended as a result of industrial action resulting from the dispute between RMT and Network Rail.

“Due to the wider disruption caused, we’re also advising customers to only travel by rail if essential for 20, 22, 24 and 26 June.

“TfW is not in dispute with RMT, but the industrial action means we’re unable to operate rail services on Network Rail infrastructure.”