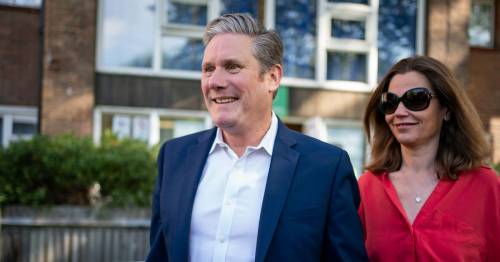 When will local elections 2022 final results be announced? Count times for every council

The picture will become clearer as results continue to come in, but the Tories have suffered clear losses in London, losing control of Barnet council for the first time since 1964 and the flagship London council of Wandsworth, Tory for the last 50 years.

Labour Party leader Keir Starmer said his party is "back on track".

He said: "We have turned a massive corner in the Labour Party here. We're winning in London, we're winning north and south."

Meanwhile, some disgruntled Conservatives had laid blame on Johnson for the poor results.

Tory MP David Simmonds said: "Overwhelmingly the message that I heard on the doorsteps was people were broadly positive about the Government's policies but they are not happy about what they have been hearing about partygate."

So what about the rest of the councils and when will key seats be announced?

Scotland and Wales begin their count at 9am
(

Plenty of local election results in England have already been announced, with some results coming in before midnight. Most if not all results across the UK are expected to be in on by Saturday night.

You can read our-hour-by-hour guide here for more information, or read below for a summary.

Some interesting seats in England are still to be counted, and Rossendale, Burnley and West Lancashire should all report their results at around 3pm as Labour hope to regain some of the damage caused to them in recent years.

Mayoral elections are also expecting results later today, as well as some extra council seats to be announced in Birmingham and West Sussex.

The majority of results in London and the rest of the UK were scheduled to come in from around 3am and have already been declared.

Croydon and Tower Hamlets in London is not expected to declare until the early hours of Saturday morning and evening respectively.

As for the mayoral elections the Lib Dems will find out if they have held onto the mayoralty in Watford from around 1pm.

Labour will hope to return mayors in Newham, Hackney and Lewisham and should find out if it has defended the mayoralty in South Yorkshire from around 5pm.

Counting began at 9am in Wales and Scotland and there are key seats for Labour to defend such as a slim majority in Cardiff.

The first Scottish results are expected to come in from around 1pm.

Also in Wales, the only Tory council is Monmouthshire and the Conservatives may well lose their majority if they lose just a small number of seats.

In Scotland, the once Labour-dominated country is now fighting to win back control of Glasgow, which turned SNP in 2017. Results for the city could be in from around 5pm.

Counting in Northern Ireland does not begin until Friday morning and results may not be clear until Saturday, May 7.

You can full results in your local area using our handy widget.

Are the local elections a good result for Labour?

Keir Starmer has been positive about results so far
(

Labour gains have been positive in London, so far taking control of Barnet, Wandsworth and Westminster, but the party has made minimal gains elsewhere and lost Hull to the Liberal Democrats.

Party leader Keir Starmer pointed towards success in the newly-created authority of Cumberland.

He said: "What a difference it has made and Cumberland, a very important win last night in key constituencies for the next general election, same in Southampton. Many more results to come today."

The party is building from good local election results under Jeremy Corbyn in 2019, when then Prime Minister Theresa May was struggling.

However, Labour support in traditionally red areas was decimated by the Tories in the general election 2019 as voters fell out with the idea of Corbyn in No.10 and more delays to Brexit.

Results so far do not necessarily indicate Labour has regained its traditional support, with its majority reduced in Sunderland

The BBC's election results expert Sir John Curtice said: "Labour is out celebrating this morning, with its leader, Sir Keir Starmer, saying the party is "back on track" for the next general election.

"But while the Tories are disappointed by their losses, they claim these are focused in London, and the party is doing better elsewhere in England."

Previous : Gas leak blamed for explosion at Cuban hotel that killed 22 – World News
Next : Putin has not ‘destroyed’ bridges between Ukraine and Russia, Volodymyr Zelensky says