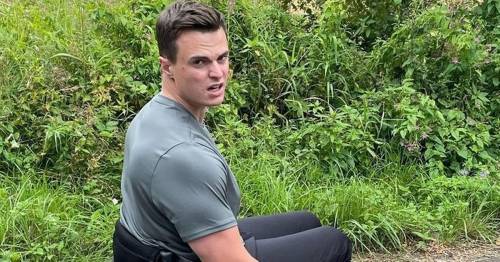 A disabled man stranded on a station platform in his wheelchair on the hottest day of the year was left crying as he dragged himself up a flight of stairs when staff refused to help him.

Looking visibly emotional and tired, former rugby player Chris Nicholson talked about his ordeal in an Instagram story post and said it has "been one of the worst days in a long time".

Chris was left stranded at Milton Keynes station on Friday when his train to London was cancelled due to a fire on the train line and "all sorts of issues" as the UK sweltered in 31C heat.

Having been taken off the train, Chris, who had played rugby for England under 16s, 18s and 20s, went to take the lift to another platform but found out it had not been working for a week.

The lift hadn't been working for seven days
(

But he says Avanti West Coast staff refused to help him up a flight of stairs due to "health and safety" and instead said he'd have to wait five hours on the platform, as others walked across and caught the next train within 40 minutes.

To make matters worse, Chris was in desperate need of the toilet, and with no disabled facilities, he was also told he wouldn't be able to use the able-bodied loos as they, too, were out of order.

"Long story short, I was going to have to bum shuffle up the stairs and it was two flights and Avanti said they couldn't help me and were not going to help me because of health and safety and of all those other reasons where they deemed it too much of a risk for them," he said.

"As a customer to them, they weren't willing to help me, they weren't even willing to take my f****** bags. I got my bags up the first flight with me dragging my chair one-handed going sideways up the steps. A gentleman from platform one saw me struggle and he helped me."

Chris burst into tears halfway up the agonising climb, which prompted the assistant manager at the station to "start kicking off" to the manager saying that "we need to help him as he looks in distress", he said.

"If that ever happens to someone in your family I hope you remember this situation and consider how much this has affected me because I would hate to see your family members be put through that," Chris said.

Having finally arrived in London, Chris told his 28,000 followers that his "back is in bits".

"I'm in a lot of pain because of my back because of the struggle that I had to do, literally getting up and dragging my body up and my chair up a f****** flight of stairs until people realised I was struggling and so they came and helped out," he said.

He thanked those that helped him, and his pregnant wife, Fay Sambrook, who "dropped everything" to drive down to be with her hubby.

Chris' rugby career was cut short when he was left ­paralysed and in a coma after an accident on the pitch.

He was left with a spinal cord and brain injury, and almost died three times while in hospital.