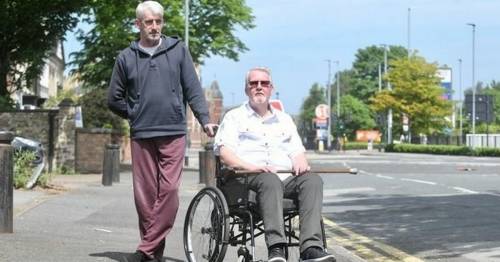 A disabled man claims a taxi driver left him stranded in the street after refusing to help him with his wheelchair.

Kev Hollingsworth, 56, from Hull, was returning home from a visit to his friend's house when the row broke out.

Hull Cars told the pair that the driver has since told them the dispute was caused by a debt from a previous journey, although Kev and Simon deny this.

Kev has been regularly catching taxis back home from his friend's house for a number of years and said he'd never run into a similar problem with drivers before. 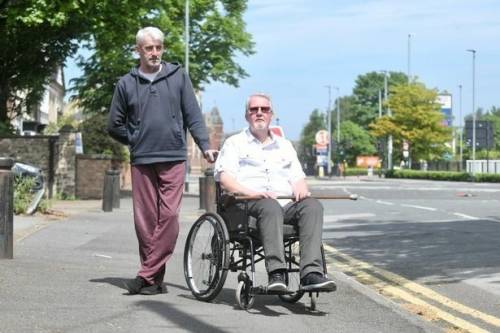 He and his pal told HullLive that the driver initially claimed his refusal to help was due to worries about Covid-19.

Simon said: "Kev has been coming over to my house every couple of weeks for years, he always gets a taxi back home and to be honest we have run in to a few issues in the past.

"I don't think we've ever had someone leave him on the side of the road before though, that is a new one.

"Kev is a wheelchair user and I'm disabled myself so when we got to the car we assumed the taxi driver might get out and offer to help with the wheelchair like they normally do.

"He didn't get out and was just watching us so I asked him if he could come and help us lift it in and he just said 'no, I'm not getting out to do that, I don't have to help you'.

"I told him if he'd got an issue doing it he shouldn't have taken the job because we always tell the company when we book that Kev uses a wheelchair and will need help. 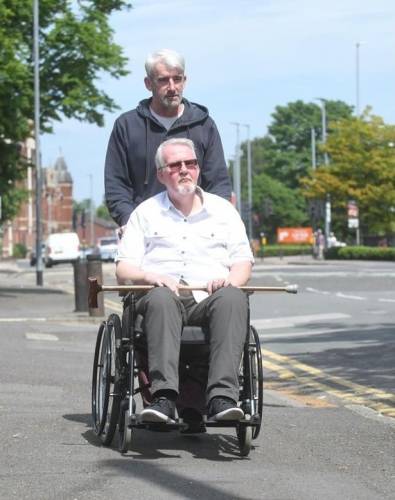 Simon said he was 'disgusted' by how the driver behaved
(Image: Katie Pugh/Hull Live)

"He got agitated with me and said 'you're going to do that to your friend? I'll leave him here if I have to'. Then he drive off and left us there, I felt it was disgusting what he did."

Kev suffers from arthritis in his knees which he says comes from a youth spent playing a lot of rugby, this means that he is reliant on his wheelchair to get around.

Simon has a number of conditions including COPD which means he is meant to avoid physical exertion where possible, the pair reported their complaint to Hull Cars.

In their initial response to the complaint, Simon says Hull Cars repeated claims that the driver was worried about Covid-19 and this was the reason he was unwilling to exit his vehicle.

Simon said he told the company that Covid-19 safety guidelines do not overrule the right for disabled people to be able to get accessible transport when requested.

Kev said: "They keep coming up with a lot of excuses whenever I ring up, it is always a different story now and I think that is the worst bit.

"The thing is another driver came along afterwards and was absolutely fine, he did what you'd expect anyone to do and helped me with the wheelchair into the back.

"He even gave me the name of the driver that had come before so I knew who I was talking about when I rang up.

"If the driver didn't want to help a disabled person and have to get out his car then he shouldn't have taken the job on in the fist place. Instead he left me on the side of the road."

A spokesperson for Hull Cars said: "The driver in this incident claims that there was an outstanding bill between him and the two men from when he was working for another company.

"He says that this led to the dispute which resulted in him driving away before we dispatched another of our drivers to pick the customer up.

"At Hull Cars we do everything we can to accommodate the needs of our customers and take requests for accessible vehicles, strict Covid-19 safety measures beyond guidelines and much more."