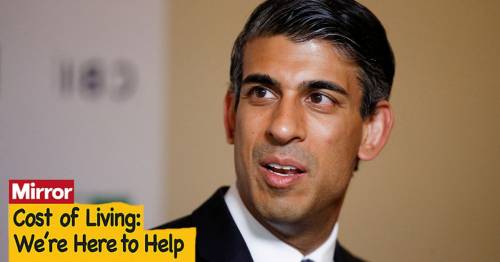 Energy discounts and one-off payments for households who claim benefits are just some of the measures of support announced by Chancellor Rishi Sunak this afternoon.

The Chancellor has been under pressure to help ease the burden of the skyrocketing cost of living, with energy bills predicted to surge by another £800 this year.

Families are also under pressure from record-high prices of petrol and diesel, as well as the fastest rise of the price of food in supermarkets for 13 years.

UK inflation has now hit 9% – a new 40-year high – as the cost of living continues to spiral.

The Chancellor acknowledged that high inflation is causing "distress" for people in the country, telling MPs: "I know they are worried, I know people are struggling."

He said the Government "will not sit idly by while there is a risk that some in our country might be set so far back they might never recover".

But what exactly has Mr Sunak announced this afternoon, and how much of an impact will it have on your wallet?

What it means for your energy bill

Every household in England, Scotland and Wales will receive a £400 discount off their energy bills, after the Chancellor confirmed he will ditch previous plans that would’ve forced people to pay back help.

The new support comes instead of the £200 that had been labelled as a "loan" and would've been paid back starting from 2023 in the form of a new levy for energy customers.

The Chancellor today confirmed he will turn the £200 into a grant – meaning struggling households will not need to repay it.

Mr Sunak will also increase the amount you’ll get off your bill by an extra £200, taking the total discount to £400.

But the new support is still only half of the £800 the boss of Ofgem warned its price cap will increase to this October – meaning families still face huge increased household costs.

Jonathan Brearley, the chief executive of Ofgem, warned this could rise to £2,800 in October.

There was also no cut announced to VAT on energy bills, which would've provided even further savings.

What it means for people on benefits

Millions of households who claim benefits received the most support from the Chancellor this afternoon.

For those in receipt of means-tested benefits, there will be a one-off payment worth £650, coming in two lump sums – the first from July, the second in the autumn.

Benefits that are means-tested – so ones that take your income and savings into account – include Universal Credit, Pension Credit, Tax Credit.

As many as 8.4million people claim means-tested benefits, which includes the following payments:

People across the UK who receive the following disability benefits will receive a one-off £150 payment:

If you receive means tested benefits as well, you can get this £150 on top of the separate £650 payment.

This payment is expected to arrive in September.

But ministers had ruled out restoring the £20 Universal Credit uplift that was temporarily available during Covid, which is what many critics had called for.

There was also no talk of bringing forward the increase of benefits rates, which happens every April.

Critics have called on the Chancellor to bring in more permanent and long-term support.

"Those who are just-about-managing but not reliant on benefits will still struggle to make ends meet," said Laura Suter, head of personal finance at AJ Bell.

"The blanket approach of handing out £550 to every UK household, including the highest earners in the UK, will surely face criticism when it could have been redirected at those low and middle earners struggling."

What it means for pensioners

Pensioner households who receive the Winter Fuel Payment will receive a one-off payment of £300.

The good news is, this will be paid on top of any other one-off support a pensioner household is entitled to – meaning you'll get the payment on top of Pension Credit or any other benefits you claim.

All pensioner households will get the £300 payment as a top-up to their annual Winter Fuel Payment in November or December.

The Winter Fuel Payment is currently worth between £200 to £300, so the payment will represent at least double this support.

You are eligible for the Winter Fuel Payment if you are over state pension age (aged 66 or above) between 19 and 25 September 2022.

This is the qualifying period for Winter Fuel Payments for this year.

Pensioners will also breathe a sigh of relief after the Chancellor confirmed the state pension triple lock will be reinstated from next year.

"Retirees will now need to wait until September’s CPI inflation figure is published to find out just how much of an income boost they will receive next year," added Ms Suter.

"But if inflation remains high then it is likely to mean hundreds of pounds extra in people’s pockets in 2023/24.”

What it means if you can't afford food and petrol

The Chancellor said his support announced today is tailored towards households who are the most vulnerable and in need of help.

In short, the automatic support – so money you don't have to apply for – is going to those who claim benefits or elderly households.

If you're of working age and you don't claim benefits, but you're struggling to make ends meet, the only upfront cash help you might be able to claim is through the Household Support Fund.

The Household Support Fund has been boosted by another £500million from October. The pot of cash was originally worth £500million but was already doubled to £1billion.

The new support will extend the Household Support Fund from the autumn time this year to March 2023.

But the trouble is, the help each council offers and its eligibility criteria varies across the country – meaning the support on hand can be a postcode lottery.

Some of the help – if you qualify for it – includes free cash and vouchers to help pay for heating your home or to cover costs of your weekly grocery shop.

The Chancellor didn't offer any further cut in fuel VAT for drivers who are worried about rising petrol and diesel cost, in a blow for motorists who are struggling at the pumps.

Previous : ‘Finally, a U-turn from Sunak and Boris – but the support isn’t enough for families’
Next : Logan Paul goes public with amount of money he claims Floyd Mayweather owes him