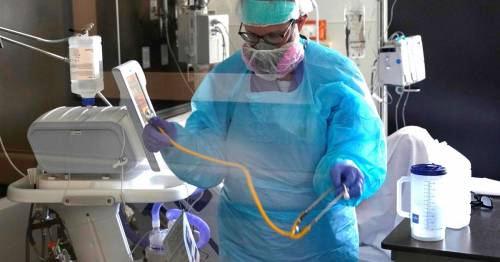 Compulsory face masks, working from home and controversial vaccine passports could all be brought in this winter in England if Covid cases surge – amid warnings of 7,000 hospital admissions a day.

Yesterday Health Secretary Sajid Javid outlined his 'Plan B', which could be brought in at short notice if things go wrong.

Health chiefs are anxious that a swell in coronavirus cases risk once again overwhelming the NHS, with the number of people in hospital steadily rising since Freedom Day.

It comes after the Sage Committee called for measures to prevent a rise in people being admitted, with six million adults across the UK still unvaccinated.

Latest Department of Health data shows that more than 1,000 people were admitted to hospital last Thursday alone – bringing the weekly figure to more than 7,000.

Last week The Mirror revealed that Liverpool, Leicester, Birmingham, Nottingham and London had seen the sharpest rise in patients in the six weeks after restrictions were lifted across England.

The Sage committee has warned that admissions could rise to 7,000 in a worst case scenario
(

Mr Javid made it clear that the government would act swiftly if there were signs that hospitalisations were rising to an unacceptable level.

He has declined to put a figure on what this would be, but it comes days after a Sage report suggested UK hospitals could see between 2,000 and 7,000 admissions per day in England next month.

Speaking at a Downing Street briefing, the government's chief scientific adviser, Sir Patrick Vallance said that the UK is at a "pivot point" and the situation could worsen fast.

What does the latest data tell us about hospital admissions?

If "Plan B" comes into effect, it would only do so in England, as each of the four nations that make up the UK are determining their own Covid policies.

Latest figures released by the Department of England show that 658 people were admitted on Sunday with Covid, while yesterday there were 6,344 people in hospital being treated for the virus.

Of these 888 were in ventilation beds.

Although admissions remain far lower than the winter peak – with 4,134 people hospitalised with Covid on January 12 – the rise in cases has worried officials after they dropped off dramatically in the spring and early summer.

Between April 28 and June 2, the number of daily admissions remained below 100 before beginning to rise.

In January there were more than 4,000 admissions in one day

How many people are in hospital with Covid in England?

There were 6,344 yesterday, the Department of Health announced.

For more than a month, between May 6 and June 14, the number of Covid patients in hospital was below 1,000, and NHS chiefs are anxiously monitoring the situation.

At the height of the winter peak there were more than 34,000 – leaving many hospitals unable to provide care for people with non-Covid conditions.

The government is keen to avoid this happening again, so measures will be introduced if this is seen to be creeping up.

It is feared that the return of schools after the summer holiday will fuel a dramatic rise in cases, which will inevitably translate to increased hospitalisations a fortnight later.

What about the number of infections?

This will be key to predicting what happens next.

Throughout the pandemic there has been a direct correlation between cases and hospitalisations, so reducing the spread is key.

Yesterday England saw 19,739 confirmed infections, accounting for the majority of the UK's 26,628 cases.

This is a drop from the mid summer, when upwards of 50,000 were recorded per day.

On this evidence, hospitalisations are likely to remain steady for at least two weeks, although it remains to be seen whether the return of schools and employees to workplaces will drive an increase.

For the worst case scenario of 7,000 infections a day, the R number – which measures how fast the virus is spreading – would need to reach 1.5 and stay there for some time.

At the moment it is estimated to be between 0.9 and 1.1 in England – meaning 10 infected people pass Covid to between nine and 11 people.

Addressing the House of Commons yesterday, Mr Javid said that encouraging people to get jabbed will be key to preventing another lockdown.

More than 81 per cent of the UK's adult population is now fully vaccinated, and the rollout to children aged 12 to 15 will further increase the population's resistance to the virus.

It is estimated that more than 112,000 lives have so far been saved by the vaccination programme, but with six million adults still not taking up their jabs, there is still work to do.

"The more people that are unvaccinated, the larger the holes in our collective defences," the Health Secretary said.

The government is set to focus on encouraging those who have not been vaccinated to do so as data shows the unvaccinated are nine times more likely to die from Covid.

Millions of adults in the UK have still not been vaccinated

Would a new variant force us into Plan B?

Potentially, if a vaccine-evading strain were to emerge.

Professor Chris Whitty, when asked what the "trigger" for plan B to be introduced could be, said: "Certainly, new variants are one of the things we need to look at.

"The worry would be one that can escape from the vaccine".

He also warned that the nation is yet to face a winter with the Delta variant among the population, and said anyone who says they can predict what is going to happen has not been paying attention for the past year.

"Were there to be a variant that was both transmissible and could escape from the vaccines, that would put us in a new situation," he added.

What would Plan B actually involve?

While the government retains the power to impose lockdowns – both national and lockdown – officials have made it clear that this is a last resort.

Instead the winter plan includes the possibility of bringing back compulsory mask wearing, which was scrapped on July 19.

People could also be encouraged to work from home if possible in order to reduce the contact with the virus thrives on.

Perhaps the most controversial measure would be the introduction of vaccine passports, which the government had previously appeared to have scrapped.

Yesterday Mr Javid said the the move was being kept in reserve, but said he was hopeful it would not be needed.