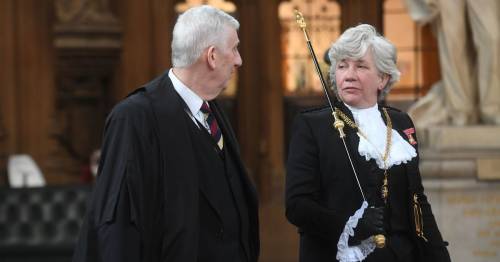 What is Black Rod?

It is the Queen’s Speech today, May 10 2022, which will see the government set out its aims for the coming months.

This year promises to be a little different as Charles, Prince of Wales, will deliver the speech on his mother the Queen’s behalf.

Accompanied by Prince William, the Duke of Cambridge, he will read out the hopes and aims of the government to mark the official State Opening of Parliament and is expected to cover the new laws the government hopes to enact.

The ceremony drips with tradition and history, and watchers would be forgiven for being a little confused by the many odd rituals that take place.

One such oddity is the role of Black Rod, a strange role at the centre of the day, whose importance dates back to the origins of the British governmental system.

What is Black Rod?

The Black Rod plays both a ceremonial and administrative role
(

In the House of Lords, there is a particular senior office held by an individual known as Black Rod.

This person is responsible for maintaining order within the house and controlling access to it.

They report to the Clerk of the Parliaments, the top administrator for the House of Lords.

What does Black Rod do?

The ceremonial duties of Black Rod are perhaps the most famous. At the State Opening of Parliament, Black Rod plays a role that is perhaps the source of one of the Houses' most recognisable scenes.

Black Rod heads over to the House of Commons from the House of Lords, where they summon MPs to listen to the Queen’s Speech.

In a brilliantly bizarre and very British tradition, the door is slammed shut in Black Rod's face as a symbol of the independence of the House of Commons.

With their black rod, they then bang on the door three times at which point the door is opened.

The MPs subsequently emerge and follow Black Rod to the Lords, chattering noisily as they go.

When they reach the Lords the MPs listen to the Queen’s Speech.

The administrative role of the Black Rod is a little less famous.

They are the Lady or Gentleman Usher of the Black Rod, a role that sees the holder responsible for maintaining order in and organising access to the House of Lords. This is a position appointed by the Crown.

They are also responsible for the spaces in the building that are there for the Queen, known as her residual estates. This includes the Robing Room and the Royal Gallery.

Who is Black Rod?

At the time of writing, May 10, 2022, the position of Black Rod is filled by Sarah Clarke.

She was appointed to the position on November 17 2017, undertaking the responsibilities of Lady Usher of the Black Rod in February 2018.

Up until 2019 Dennis Skinner, a veteran Labour MP known as the Beast of Bolsover, undertook the informal role of heckling Black Rod during the walk.