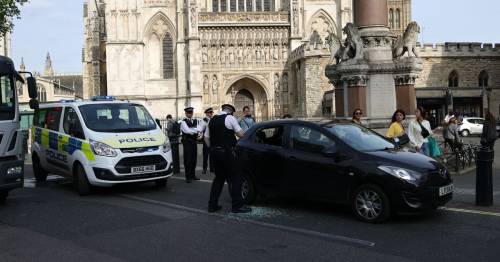 Loud bangs were heard near Westminster Abbey and the Houses of Parliament where bomb disposal carried out two explosions.

Police officers swooped on the area to investigate a "suspicious vehicle" near Westminster Abbey amid reports of a bomb threat in the area.

Two controlled explosions were carried out and roads have now been reopened.

Pictures and videos emerged from the scene showing a bomb disposal drone and emergency services rushing to the incident.

Two explosions were heard at roughly 4.40pm as officers were reportedly called to the scene shortly after 2pm.

Police responding to reports of a 'suspicious vehicle' in Westminster
(

A huge cordon was set up stretching from Trafalgar Square to Westminster Abbey as officers shutdown the area and Parliament Square was even evacuated.

The City of Westminster Police tweeted out, confirming the explosions heard were controlled.

They said: "Two controlled explosions were carried out close to Westminster Abbey.

"The incident was stood down at about 5pm. Roads have reopened and the cordon has been lifted."

Previously officers said they were dealing with "an ongoing incident involving what is believed to be a suspicious vehicle.

Officers at the scene
(

“A number of road closures are in place while emergency services deal with the incident.”

So far there have been no arrests relating to the incident.

Previous : Woman suspected in slayings of boyfriend, brother found dead
Next : Princess Diana’s tragic brother is remembered as her family pay tribute to his short life