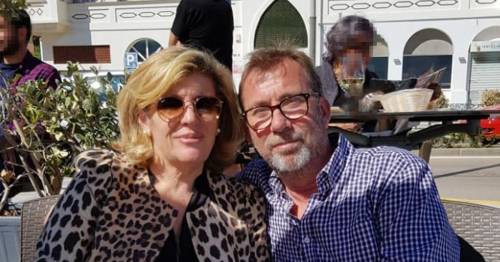 A wealthy Brit who stabbed his wife to death after locking their teenage son out of their Costa del Sol home has been sentenced to 20 years in jail.

Computer programmer Geoffrey Elton was convicted of the savage murder of his wife last Friday after a jury ruled his alleged mental health problems were “made up” and he must pay for his crime.

Today the trial judge announced he was sentencing the 57-year-old expat from Worksop, Notts, to 20 years and one day behind bars.

The prison term, confirmed in a 30-page written ruling, coincided with the punishment a state prosecutor said he was seeking at the end of Elton’s four-day trial.

A private prosecutor acting for murder victim Gloria Tornay’s family had demanded a 25 year prison sentence when the trial ended before the judge delayed his sentencing.

The 20 year prison sentence the Brit expat received was the lowest penalty he could have got under Spanish law for his crime.

Judge Rafael Linares said the murder victim’s lawyer had not justified its call for the maximum 25 year jail term he could have got under Spanish law.

Elton claimed he was suffering a mental disorder when he repeatedly stabbed his pretty wife to death in March 2019 after a failed bid to suffocate and strangle the 58-year-old Spaniard.

State prosecutor Julio Angel Martinez Carazo admitted at the start of the murder trial he believed the Brit had a mental illness which distorted his appreciation of reality, but insisted it did not exempt him from criminal responsibility.

The nine jurors ruled Elton was sane when he killed his wife of 33 years – and compounded his “vile” crime by locking their teenage son Alonso, 15 at the time, out of the house after attacking the mum-of-two as part of a deliberate attempt to impede the arrival of help while she agonised on the marital bed.

The jury foreman, reading out the unanimous murder verdict as Elton looked on impassively a few feet from his two sons and Gloria’s emotional five siblings, added: “Geoffrey Elton surprised his victim in their home which was a place where she felt comfortable and deliberately increased her suffering by stabbing her 17 times in a slow attack over the period of an hour.

Geoffrey Elton, 55 arriving at court this morning in Spain
(

“This jury has decided unanimously that he was totally conscious of what he was doing and hindered the arrival of the emergency services by throwing the three phones out of the family home, bolting the locks on the front door after closing it on his son when he went to get help, and shutting down the power so the house was in complete darkness.”

Elton, whose defence lawyer had wanted him to be sent to a secure psychiatric centre instead of prison, apologised for his actions in a short court address before the jury’s guilty verdict.

Speaking outside the court in Malaga where the trial was held on behalf of the family, Gloria’s brother Nicolas Tornay said after the jury verdict but before today's sentencing: “Nothing will bring my sister back but we feel some satisfaction in knowing justice has been done.”

Previous : Man arrested after mum-of-three ‘dismembered with chainsaw’ at home in horror attack
Next : Frankie Dettori opens up on “difficult” start to “new life” alone aged 14