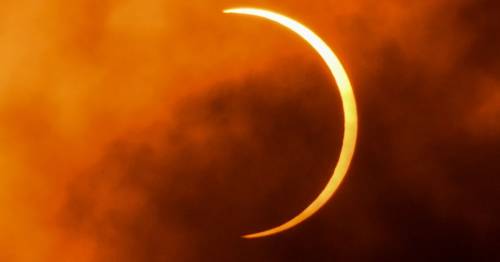 Skygazers will soon be transfixed by the sight of a partial solar eclipse, an extremely rare celestial event.

According to experts the phenomena will begin at 10.08am on June 10 in the UK, with the maximum eclipse occurring at 11.13am.

The eclipse, which will see almost a third of the sun blocked out by the moon, is set to end at 12.22pm. But spotting it might be tricky in some areas due to cloudy skies.

Not to worry though — our live video above will show the full 'ring of fire' event as it appears around the world.

An eclipse occurs when the sun and the moon are perfectly aligned with Earth but the apparent size of the moon is smaller than that of the sun.

The result is that the sun is obscured by the moon, with our giant star only being visible as a bright ring, or annulus. This only occurs when the sun and moon are exactly in line with the earth but the apparent size of the moon is smaller than that of the sun.

Sadly the so-called "ring of fire" will today only be seen as a crescent sun in the UK and Northern Ireland as it is only a partial eclipse here.

What do you think of this? Let us know in the comments section below. 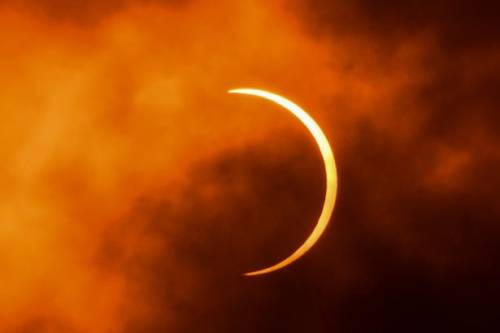 Skygazers are set to be awed by the fascinating partial solar eclipse, which only occurs once a year
(Image: AFP via Getty Images) 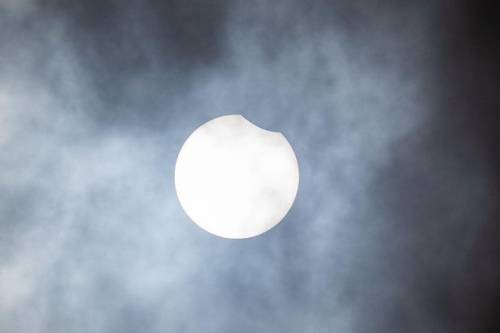 An image of the eclipse as sighted in Birmingham on Thursday morning
(Image: Alamy Live News.)

People in central and south-east England will have clear spells to witness the spectacle, according to the Met Office.

But for others it will be "somewhat fleeting" due to clouds.

Shetland is expected to have the best view in the UK with a 39% obscuration, BBC News reports.

In other parts of the country, Belfast is expected to have an obscuration of 30%, with Newcastle seeing 28%, Penzance at just under 22% and London could see 20% obscuration. 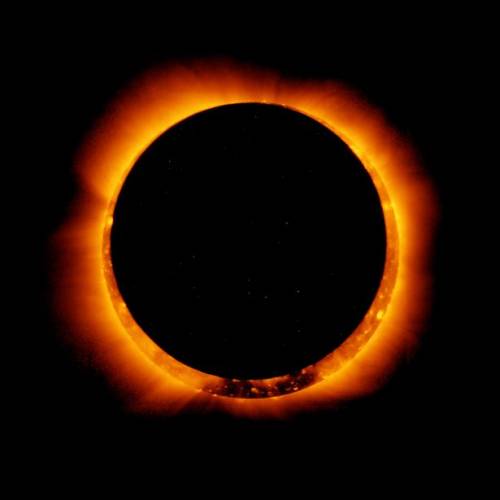 The phenomena sees the moon covering the sun in what makes it appear as a 'ring of fire'
(Image: Getty Images)

The Met Office has said parts of the UK will see clouds covering the skies although most regions are expected to remain dry.

"Much of the far south-west of England, Wales, Northern Ireland, western and central Scotland will have more in the way of cloud cover, and whilst this may thin by day, the likelihood is that visibility of the eclipse will be somewhat fleeting," Met Office spokesman Stephen Dixon said.

Dr Emily Drabek-Maunder, an astronomer at the Royal Observatory Greenwich, said the "ring of fire" will be seen from Russia, Greenland and northern Canada.

She warned not to look at the eclipse without eye protection as it could cause sever damage to your sight.

Dr Drabek-Maunder said: "The eclipse from the UK will only be visible with certain techniques and optical aids.

"Never look at the sun directly or use standard sunglasses – it can cause serious harm to your eyes," she said.