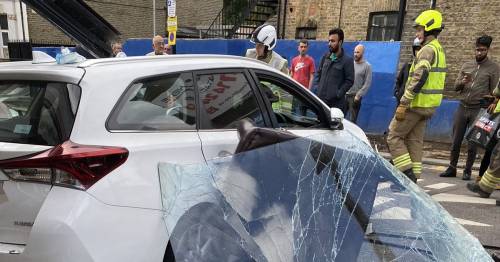 Five people have been injured after a car smashed into a barber shop in a busy street in east London.

London Ambulance Service (LAS) confirmed that it is on the scene of the crash in Walthamstow where they are treating a number of injured persons at the scene.

An air ambulance was also seen landing on the grass outside The Mall in the centre of Walthamstow.

The incident is understood to have happened on Hoe Street at around 2pm on Thursday with a number of ambulances and fire engines at the scene, My London reports.

Dramatic footage uploaded on Twitter shows the aftermath of the crash.

Did you witness the crash? Email webnews@mirror.co.uk

Five people have been injured in the crash

The crash scene in Walthamstow

Shocked witnesses can be seen helping the injured while the glass from two sides of the barber shop has been completely smashed.

Saleem Mohammad, 40, told the Evening Standard: "The car has come through one window and straight out the other side of the shop.

“There was a woman screaming with blood coming from her face and trapped under a big piece of glass. People had to move it off her. I think she was just walking past or standing outside.

The car smashed into a barber shop in Walthamstow

“One of the barbers looked worst hit he wasn’t moving or saying anything.”

A spokesperson for the London Ambulance Service said: "We were called at 1.45pm today to reports of a vehicle colliding with a building on Hoe Street, E17.

"We treated five people at the scene and took all of them to hospital, three as a priority. Our crews have now been stood down from the scene.

"We treated five people at the scene and took all of them to hospital, three as a priority.

"Our crews have now been stood down from the scene.

"Officers, along with colleagues from the Ambulance Service and the London Air Ambulance Service, attended the scene and immediately provided first aid to the 65-year-old driver and others at the location.

"All injuries are believed to be non-life threatening and non-life changing.

"A number of road closure are in place.