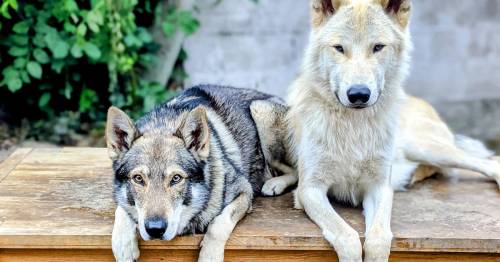 When Amr Madbouly’s 50kg wolf dogs began to drag him down the street, little did he know that they would go on to save someone’s life.

It was late on Sunday night (January 9) when the 31-year-old was out walking Sultan and Wolfie in Bridgend, South Wales, with his two and three-year-old British Lupine dogs.

At around 11pm, the wolf-like dogs sensed something that they wanted to check out, and began to pull Amr to an unlit patch of land.

He said: “Wolfie is a low-content wolf dog, while Sultan is mid-content, but the two of them are like walking radars with extremely amplified senses and alertness.

“We were walking and Sultan dragged me in a way he never has before – and then Wolfie joined in too.”

The persistent dogs guided Amr over to a patch of land where he came across a discarded umbrella, before spotting a purple jacket at the bottom of the hill.

Amr added: “I soon realised it was an older man and he was shouting help in a really quiet voice. He must have fallen over and hit his head on the wall and became ill.

“He was struggling to move his lower half and couldn't get up at all and was crying for help.

“It was freezing cold, raining and late at night – he had fallen in a really dark and quiet place so we were lucky to have found him.”

The dog owner called the emergency services and police were quick to thank the dogs for saving the man’s life.

“Police gave both the dogs lots of fuss and cuddles and thanked them as the gent was taken to hospital,” said Amr.

“If the dogs hadn't found him, this man could have been in a worse situation right now.”

He added: “I’m immensely proud of them for saving that man’s life.”