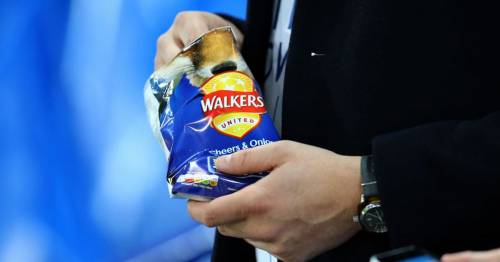 Crisp lovers across the country are up in arms over a shortage of Walkers snacks.

The fan favourite has been experiencing supply chain issues that has led to supermarket shelves being stripped bare.

People have been taking to Twitter to express their panic, with some arguing it's the most significant crisis of this year – even more so than the petrol shortage.

Cheeky fans have also started flogging single packs for almost £7 on eBay with boxes selling for an eye-watering £123.

"We’ve not had walkers crisps in our Tesco for weeks. Disaster," said one struggling crisp lover.

Walkers has explained what is causing the issues
(

Another added: "I can tolerate no bog roll, petrol and all the other nonsense but a shortage of Walkers crisps is too much for me."

Walkers even had to go so far as to ask stores to remove promotions last month in a bid to avoid shortages, according to The Sun.

So what is causing the supply chain issue?

Walkers has confirmed that an IT upgrade is the reason behind the shortage of its crisps.

It is understood the technical issue has been fixed but it is the knock-on effect that has been disrupting supplies.

A Walkers spokesman said: “A recent IT system upgrade has disrupted the supply of some of our products.

“Our sites are still making crisps and snacks but at a reduced scale.

“We're doing everything we can to increase production and get people's favourites back on shelves. We're very sorry for the inconvenience caused.”

Have you noticed a lack of Walkers in your local supermarket? Let us know in the comments.

How long will it last and what flavours are affected?

Walkers has said it is prioritising its most popular crisp flavours, including cheese and onion, ready salted and salt and vinegar, as well as Quavers and Wotsits.

However, it hasn’t given a timescale for when stocks will be replenished.

It doesn’t seem to be just one flavour that has been affected by the issue.

Crisps including classic ready salted Walkers to Quavers have been in short supply, with customers struggling to get hold of packs in supermarkets.

Shoppers have also complained about a lack of Monster Munch and Squares.

One person tweeted: “Can't believe the Walkers #crispshortage! No ready salted with my lunch today.”

Another said: “Where are the cheese and onion??? I'm dying here.”

A third tweeted: “Of all the things for there to be a shortage of, it's Walkers. Where's the Monster Munch?”

And a fourth commented: “What’s happened to your Squares?”

Previous : Money Talk: ‘I found £20 in the street, would it be wrong to keep it?’
Next : Toronto police failed to notify the SIU about the beating of Dafonte Miller, external review finds