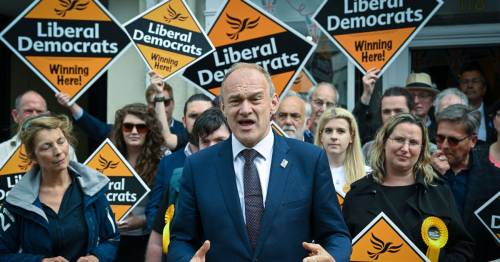 Sir Ed said: “People across Devon are sick of having a liar and law breaker as a prime minister, seeing their health services driven into the ground and farming communities neglected.

“More and more voters are coming behind our candidate Richard Foord who will be a powerful voice for Devon in Westminster, instead of yet another backbench Tory MP who will do what party bosses in London tell her to.”

Local activists predict the vote is going to be “very close” between the Lib Dems and Tories.

And Lib Dem internal polling puts them two points behind the Tories in the seat – the same margin they saw before their by-election victory in North Shropshire.

It would mean a double blow for the Prime Minister, with Labour odds-on to take back Wakefield in a by-election the same day.

Losing both seats would put Mr Johnson back in serious danger of being ousted by his own MPs.

Sir Ed added: “If we can beat the Conservatives here in one of their safest seats, overturning the biggest majority in a by-election in political history, it would send a shiver down the spine of hundreds of Tory MPs.

“The future of the country is hanging in the balance. If Labour supporters vote tactically and back the Liberal Democrats in Tiverton and Honiton, they can help deliver the knock-out blow to Boris Johnson."